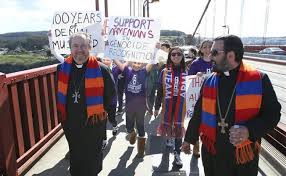 In his resent speech Pope Francis referred to the Armenian genocide as “the first genocide of the 20th century.”

The event occurred on April 24, 1915, when the  Ottoman Empire, today Turkey, rounded up Armenian intellectuals and political leaders in Istanbul. Since then authorities began a systematic slaughter of the Armenian people that lasted till 1923.

Turkey still denies the Armenian genocide, stating that Armenians died as a result of a chaos that was present in the Ottoman Empire and there was no intentional attempt to wipe out the Armenian people.