SAN FRANCISCO—The PGA Championship is held at TPC Harding Park in San Francisco without fans, from August 6 thru August 9, which is the first known modern major to be held without audience. 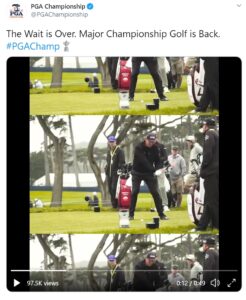 Large crowds of fans tend to gather in the fairways to see the PGA Championship, but this year, in the midst of the COVID-19 outbreak, fans were not allowed to come to see the games of Tiger Woods, Jason Day or Rory McIlroy. Fans gathered around TPC Harding Park attempted to look through the screens surrounding the course.

The sidewalks are public property and authorities were watching over the spectators, CBS SF reported.