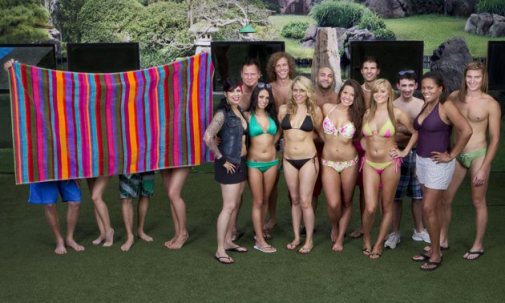 HOLLYWOOD—By now everyone knows “Big Brother” is one of my guilty pleasures for the summer, but I will admit “Big Brother 14” has been a bit boring lately, but oh does CBS know how to get the audience rattled. It’s something about double eviction night that literally puts the viewer on the edge of their seat.    The house was at a comfortable seven houseguests still in the game, with Frank and Joe both on the block.

I’m still fuming at Frank for putting his trust in the wickedly evil Dan.   If there’s one thing about Dan the audience knows, he will stab you in the back quicker than you can blink.   He literally swore on the bible, his wife and his grandfather’s cross to not double cross Frank.   Like who does that?   I get it’s a game; deception is part of it, but using religion that much is a bit much where is Dan’s integrity?

A somewhat shaky Frank thought he was in safe waters, but his houseguest sent him packing with a 3-1 vote, with Jenn being the sole vote to keep Frank.   Jenn hasn’t played much this season, but she is loyal.   A stunned Frank only gave Jenn a hug as he exited the house to loud sheers of applause; trust me he’ll be on next summer’s all-star season, its about time for another one.   While in the house he won Head of Household three times as well as three vetoes, no one worked as hard as Frank to stay in that house.   If Janelle or Britney doesn’t get America’s Player, Frank definitely should.

In a tense HOH competition where it looked like Jenn might walk away victorious, it came down to a tiebreaker between her, Dan and Danielle, with Dan taking the win.   In perhaps one of the most stunning events of the night he chooses to nominate Ian and Joe.   I couldn’t’ believe he literally threw the guy who just kept him safe the previous week under the bus, but Ian would not go down without a fight as he won the veto with an uproar from the crowd;   its evident who the audience adores and Dan is not it.

Just when we thought Dan was done rattling the house he decided to nominate his closet ally Danielle alongside Joe.   I was literally fuming and gasping at the same time.   Dan is digging his own grave and doesn’t even know it.   First you try to take out Ian and fail, so now you target your closet ally.   I’m hoping this sends a message to Shane, Jenn and Ian to either take Dan out this week or you’ll regret it. Ultimately Joe was sent packing with a 3-0 vote.   Not surprising to see him go.    The aftermath of Dan’s actions were felt in the house as a visibly upset Danielle kept distance from her ally, Shane looked absolutely dumbfounded and Jenn & Ian were beginning to see how ruthless Dan can be to win.

Dan can’t compete in this week’s HOH so he’s definitely vulnerable as host Julie Chen made it clear a houseguest would be leaving on Wednesday and another one on Thursday leaving us with our final three.   I’m hoping to see Jenn, Ian and Danielle in the final three; Shane started as a powerhouse, but has lost that steam.   I must admit I’m still fuming that Janelle, Britney and Mike are no longer in the house some of the best players taken out by those who have done virtually little to nothing in the house.    Do not miss “Big Brother 14” on Sunday as the new Head of Household will be crowned and nominations will take place, things are getting exciting again!