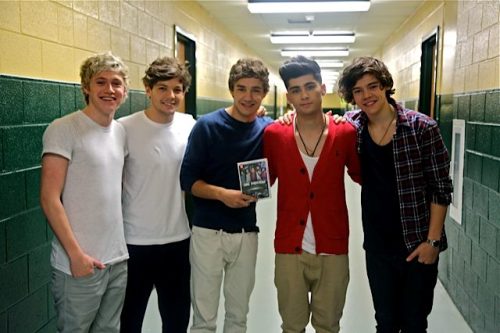 LOS ANGELES—The boy band is back in full effect as One Direction dominated the 2012 MTV Video Music Awards taking home three trophies including Best Pop Video and Best New Artist.   The group was absolutely ecstatic about all of their wins for the night thanking their fans.   Rihanna who entered the fray alongside rapper Drake with five nominations apiece walked away with the Video of the Year award for her sensational “We Found Love.”   Rihanna opened the awards performing her hit “Cockiness,” which in my opinion was a bit flat.

The ceremony was hosted by comedian Kevin Hart who did a stellar job keeping a steady pace for the awards which in my opinion seemed to lack a bit of star power.   He took shots at Drake, Chris Brown, Snooki and Russell Brand which were absolutely funny.    A subdued Chris Brown accepted the award for Best Male Video for “Turn Up the Music,” while an absolutely stunned Nicki Minaj won Best Female Video for “Starships.”

Drake was victorious in the Best Hip-Hop Video category for “HYFR” which featured Lil’ Wayne.    He dedicated his award to all the kids out there who were ever made fun of.   Let’s talk about what the show is really about the performances.   Pink literally ignited the stage full of props as she sang her hit “Blow Me One Last Kiss.”    She never seems to disappoint when it comes to taking the stage.

Frank Ocean performed a subdued yet stirring rendition of his single “Thinking About You;” the vocals on this guy is amazing.   I see Grammy nominations in his near future.   Both Green Day and Lil’ Wayne also took the stage, but perhaps two of the best performances of the night happened just mere minutes before the show wrapped.

R&B sensation Alicia Keys brought down the house as she performed her new single “Girl on Fire.”   When it comes to belting on stage no one does it better.   Pop sensation and country darling Taylor Swift closed the show with her #1 single “We Are Never Ever Getting Back Together.”   The song is quite catchy and she delivered a thunderous performance on the stage, but I wonder just who is she referring to in that song; take your guesses?

Perhaps a highlight of the ceremony was not the musical acts, but audiences getting to see the cast of “Twilight” unite on stage minus Kristen Stewart to premiere an exclusive clip from the final chapter of the popular vampire series “Breaking Dawn: Part 2.”   I will be the first to admit the movie looks stunning, so if November 16 isn’t marked on your calendar be sure to do so.

Overall the ceremony was indeed a funny one, but not one of the best.    Nothing shocking happening that will have audiences talking the next day.   The 2012 MTV Video Music Awards have come and gone so until 2013!