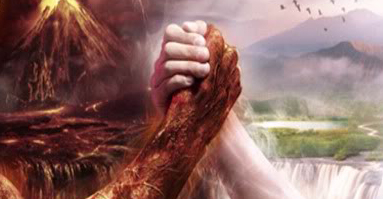 It’s been proven it’s psychologically much more difficult to be good (to do the right thing) than it is to be bad.  Its almost like temptation surrounds us at every given opportunity.  We’re tempted to do wrong; fighting the temptation to do the right thing is even more difficult.  Take a look at the local news and its enough bad news to place anyone in a somber mood.  You either hear about murder after murder or robbery after robbery or some other horrific news.  Its like bad news is everywhere that we turn.

The frightening aspect about the discussion on good vs. evil is that we personify the villain in the media.  We idolize their intentions, their ability to get away with such heinous crimes, while the good guy continues an ongoing pursuit to stop them.  Take the television show “Homeland” on Showtime.  Brody (Damian Lewis) is indeed the bad guy, but why is the audience so drawn to this villainous character where your emotions for the character cloud’s your judgment of thought. Why is being evil praised, yet portraying the role of a good guy so rarely acknowledged?

Let’s take another example in the movie “Django Unchained” which sees Leonardo DiCaprio in one of his most wickedly evil roles in his acting career as a ruthless slave owner.  While Jamie Foxx’s Django is indeed the hero; the buzz from the picture is DiCaprio’s role as the villain who audiences love to hate.  I can think of one movie where audiences were thrilled with the hero “Aliens.”  Sigourney Weaver’s work in that picture is awesome and you see the audience expressing that gratitude for her ability to protect the innocent and destroy the evil queen alien.

I do believe the ability for someone to be inherently evil comes from having no role models in their life.  If a person is constantly praised for being bad versus being punished for their antics, they begin to embody the ideal that it’s okay to behave with such mischievous intentions.  Could DNA play a role in a person’s behavior, some would argue yes, others would say no definitive proof has been brought forward to statistically back up that claim. I do think it would be an interesting study to analyze the DNA of criminals and to see if there is a genetic link amongst them.

The counterargument for skeptics would be to conduct a study where the DNA for good people can be analyzed.  The problem with that theory is that even some of the good-doers in the world are capable of doing bad things if pushed to the limit.  So the argument can be made that no single person is inherently good, but it is a definitive possibility that some people are wickedly evil to the core.  Take the character of Damon Salvatore (Ian Somerhalder) from “The Vampire Diaries.”

He has made a massive transformation from being a wickedly evil vampire in season one to a charming protector in season four.  So to some degree he’s proof that even evil people can be transformed to some degree if they have a chance encounter with the right person.

While we may idolize the actions of an evil character, we know in the end that all does not end well; in due time those who commit heinous crimes are always punished.