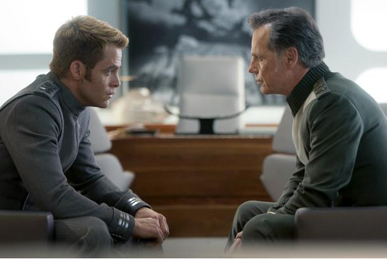 HOLLYWOOD—It’s a New Year and in the spirit resolutions are made in good faith, however, only a handful of us will actually succeed in keeping them. So many resolutions fail by the end of January. Why? They are doomed by unrealistic, excessive ambitions. Let’s say that you want to lose fifty pounds, first set a realistic goal, and go for 10 or 15 pounds by Valentine’s Day.

In other words, by setting an initial realistic goal, the chances are you will succeed since you are specifying the goal. It’s not rocket science, everyone knows that you must commit to exercise, as part of the weight-loss regime. The most important thing that perhaps most people neglect to mention in their New Year’s resolutions is willpower. The most powerful tool we possess is true willpower. In the words of Robert Louis Stevenson, “Keep your fears to yourself, but share your inspiration with others.”

Inspiration is what we will see in this coming year in the movies. It’s time to look at some of the genre films that will thrill us in 2013. Hugh Jackman will return to his roots for “The Wolverine,” which is scheduled for release in July. Its the second solo movie based on the classic story by Chris Claremont and Frank Miller.

Hugh Jackman and Wolverine are one of the greatest roles ever. It’s like peanut butter and jelly they are perfect together. Loganis in Japanfighting Yakuka, Ronin, the Hand and The Silver Samurai! In the film it introduces three iconic women of Wolverine’s romantic interests; Yukia-the wild assassin who inspired Storm to get a mo-hawk, Viper, a ruthless terrorist leader, and Lady Mariko, daughter of a crime lord.

Another film is “Thor: The Dark World” starring Chris Hemsworth, as the Thunder God who goes home again when a new threat targets Asgardi Malekith (played by Christopher Eccleston) which leads the Dark Elves on a quest for vengeance that threatens the Nine Realms. The film is directed by Alan Taylor and also stars Natalie Portman.

“Iron Man 3” is scheduled for release in May by director Shane Black. The film is based on the classic Extremis story and introduces new armor including the Iron Patriot. The film stars Robert Downey Jr., Guy Pearce and Gwyneth Paltrow.

The film “Man of Steel,” directed by Zack Snyder is about an alien infant raised on Earth, and grows up with superhuman powers. He sets out to use these powers to guard his adopted world. The film stars Henry Cavill, Russell Crowe and Amy Adams. Will the darker Superman work the way “The Dark Knight” did? There will be more evil Kryptonians.

“Star Trek Into Darkness” is scheduled to be released in 2013 by director, J.J. Abrams. An interesting film about Captain Kirk who leads a manhunt to a war-zone world to capture a one man weapon of mass destruction. Let’s see if the sci-fi classic honors the original series. The film stars Chris Pine, Zachary Quinto and Zoe Saldana.

Sadly, some of the remakes just don’t work, other times it does work. For the vast majority it doesn’t and it turns out to be just a blatant, creatively bankrupt attempt at cashing in on the name of the past. Truth be told, when is it okay to remake a film? I don’t have a problem with remakes of original films if it’s done well.

Memo to Hollywood: some movies are just off limits to remake. I just can’t see anyone pulling this off. Certain movies are just part of cinema history and should be off limits. Imagine ” Casablanca,” and “It’s a Wonderful Life,” being remade. It would be a mortal sin.