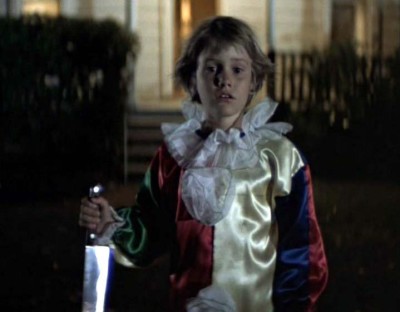 HOLLYWOOD—This might sound weird to many people, but there was one film that shaped my interest in cinema at a very young age. Actually, it was one character to be exact. Any guesses as to who? I’ll give you hint: he’s known as the ultimate boogeyman. It’s Michael Myers. There is something about a faceless, soulless, unstoppable killing machine that will haunt ones dreams.

It’s crazy that at the tender age of four I saw the movie “Halloween 4: The Return of Michael Myers.” How ironic that I didn’t see the granddaddy of all horror flicks “Halloween” until I was maybe 10 or 11. To make matters worse, it was in the middle of the night in a super dark room. Yeah, queue the nightmares. That movie delivered so many jolts to me, that till this day those scares still send chills down the spine.

What is it about a movie that utilizes simplicity to its core that scares audiences on all levels? Perhaps at its core, we have a villain who is smart as hell, genuinely scary and characters that we care about. “Halloween” does something that very few horror movies do: it relies on crafting suspense to gargantuan levels. This movie builds suspense in a way that literally scares you when you know something is about to happen.

Another high point for the movie is its lack of blood. Yes, there is violence, but its not splatter fest violent. People die, but not in such a brutal way that it turns the audience off. I recall the first time watching the flick, I barely recalled seeing any blood. The body count is quite small to say the least. Director John Carpenter stages the action in a way that we are constantly seeing things from the point of view of the killer.

It’s a unique technique that in my opinion further immerses the viewer into the chaos. Another important element to highlight is the narrative which follows Laurie Strode, the terrific Jamie Lee Curtis who finds herself at the hands of a deranged killer while babysitting. That is the key word, the innocence of children is threatened, and our heroine goes to great lengths to protect the children in addition, to herself.

Never before had audiences been treated to a villain who seemed impossible to stop: he’s stabbed with a knitting needle, poked in the eye with a wire hanger, stabbed with a butcher knife and shot six times. He’s evil personified to unbelievable depths. Curtis isn’t the only character worth noting, the esteemed Donald Pleasance is excellent as Dr. Sam Loomis; well aware of the evil that is lurking, yet he’s seen as eccentric by those who fail to heed his warnings. When he comes face-to-face with Michael in that climactic moment, the audience has no idea what might transpire.

There might be something unexpected that makes “Halloween” the scariest movie of all-time: its music. That chilling score is unlike anything I have ever heard in cinema. Yes, all horror attempts to utilize certain music to scare, this music just scares at the mere notion of hearing it. Yeah, without the music “Halloween” would loose a lot of its scare tactics, but the movie continues to be heralded because of its originality. Its not some complicated thriller trying to get the audience to over analyze what is happening. A psychopath stalks a babysitter and her friends on the scariest day of the year: Halloween. Nothing gets quite scarier than that.

The Importance Of A Good Movie Trailer