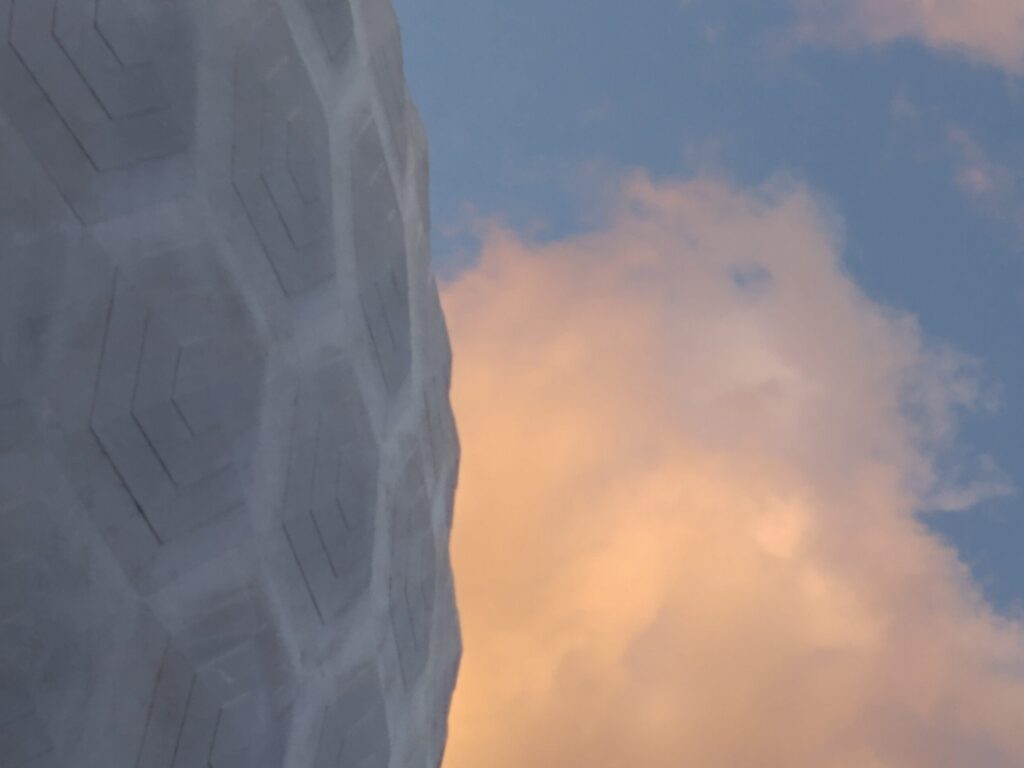 UNITED STATES—The Cinerama Dome is a geodesic souvenir. The Buckminster Fuller thing was supposed to run wild, architectural hubris being what it is, so it is unique, modest, and iconic in terms of what the sequel to 1962 brought us. It has been immortalized in Quentin Tarantino’s valentine to Hollywood and the summer of 1969—and now young hip tourists from around the world still go to check out the place and ask what it is like inside (now that the inside is boarded up? You get the curved screen and non-stadium seating…)

This mammalian shaped structure is a link to Hollywood History—and I would adjudge that it secretly harbors a wormhole that could take you back to a zone where the 1963 vision is replicated, where all the “Old Fashioneds are dry just like Dad used to make,” Studebaker Avantis prowl the street, suburbs of geodesic domes fill the horizon and all the movies are on a par with “It’s a Mad Mad Mad Mad World.”

The Dome’s preeminent place in history as seen in the world premiere of “It’s A Mad Mad Mad Mad World.” It was built expressly for it. Hollywood has a duty to hang onto the icons that become synonymous with the ‘Hollywood Dream.’ Get a load of this link straight to the 1963 zeitgeist: https://www.youtube.com/watch?v=JvELpJoW9xM

Besides having the instinct to apply widescreen, “Lawrence of Arabia” sweeping scope, to a comedy, Stanley Kramer had the intuition of leaving it to a cast of clowns to fill dramatic characters. Be made two points: Kramer could be funny and the largest scale he proved the truism that comics fluidly make the transition from comic to serious.

The point is this long look at “It’s a Mad Mad Mad Mad World” matters. This leisurely drive back into the sunny summer and fall of 1962, which begins every time the downbeat of Ernest Gold’s Academy-Award Winning score (inspired by the a merry-go-round sound: a merry-go-round to madness) and Saul Bass’s animated titles commence with “Stanley Kramer Presents” superimposed on a glowingly red widescreen panel, we start this time journey.

In our exuberant City of Angles, you become so jaded and cavalier about the destruction of the city’s architectural heritage you walk around and there are certain places you take where Schwabs Drug Store was on Sunset Blvd. Gelson’s is where Chasen’s Restaurant was. Mary McNamara observed the Los Angeles penchant for rhapsodizing about these “lost places.” Los Angeles, Hollywood particularly, is at a crossroad in Los Angeles with the Cinerama Dome and Taix Restaurant’s structure: the inefficient French Provincial structure that houses the restaurant that woven with memories of parties and family milestones.

Maybe it’s time to acknowledge the vivid life of these places.

Even my own Hollywood development is encroaching on at least two cottage courtyards. Neighbors are coming together to speak in favor the courtyard format so arch-typical of “Chinatown” and Nathanael West’s Hollywood. The root of adolescence is pain (dolor). Los Angeles is in the throes of growing pains.

Think about the places when you see the before/after video on scenes used in “Mad Mad World.” https://www.youtube.com/watch?v=lwCcownGNYM In Rancho Palos Verdes there is left only stump of a Big W tree.

The industry e-publication, Deadline.com offer some reassurance for lovers of the Cinerama Dome: “Many of those in distribution circles believe that the Cinerama Dome/Hollywood Arclight will eventually reopen, it’s just a question of when.” Think of the Dome when you revisit “Mad Mad World.”

What a fine line divides this movie for the California nightmare, and the millimetrically separated from blood, injury, horror—therein laughter swells. British critic Dan Own observes, “It’s an important film all cineastes need to see.”

Kramer said it was the hardest film he ever did.

Critic Dan Owen observes from Britain: “It’s an important film all cineastes need to see”
Kramer’s career waned in the 70s. There wasn’t much room for his kind of big issue pictures. Kramer, after leaving for Seattle, wrote a newspaper column for a while, but circled back to Hollywood, yearning for that big megaphone. One afternoon in the late 80s he rented out Laemmle’s Music Hall on Wilshire and showed snippets of all his great movies, trying to drum up support for a new project.

“There’s a place for me between cowboys and outer space,” he joked. And he said his only regret was now adding another mad in to title and having called it, “It’s a Mad Mad Mad Mad Mad World.” The poets and historian’s out there would tend to agree.

The one project hinted up his sleeve would have been a follow-up to that outlier comedy, that premiered in the Cinerama Dome. The mad who excelled in issue movies had outlived the issue and would hark back to the comedy that is now the most beloved in the Kramer canon.

Graydon Miller, the Wizard of Fiction, is the author of the audiobook epic, “Mujeres con navajas,” (Women with Knives (in Spanish only) https://amzn.to/3s5X6Lu.