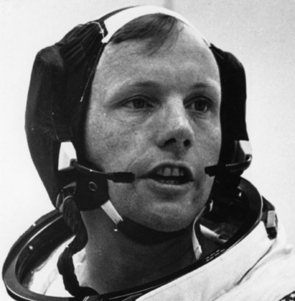 CINCINNATI, OH—The first man to walk on the man, U.S. astronaut Neil Armstrong, died on Saturday, August 25 due to complications from cardiovascular procedures. Armstrong underwent heart-bypass surgery just two days after his birthday on August 5 in order to relieve blocked coronary arteries. He was 82.

“While we mourn the loss of a very good man, we also celebrate his remarkable life and hope that it serves as an example to young people around the world to work hard to make their dreams come true, to be willing to explore and push the limits, and to selflessly serve a cause greater than themselves,” stated his family in an official statement.

“For those who may ask what they can do to honor Neil, we have a simple request. Honor his example of service, accomplishment and modesty, and the next time you walk outside on a clear night and see the moon smiling down at you, think of Neil Armstrong and give him a wink.”

His first spaceflight was in 1966 with astronaut David R. Scott on the spacecraft, Gemini 8. They were about to land an unmanned Agent rocker when a malfunctioning thruster had the ships lose control as they tumbled. Armstrong was able to disconnect the two ships, regain control of Gemini 8 and make a safe emergency landing in the Pacific. NASA regarded him as an astronaut with “extraordinary piloting skills.”

In 1968, Armstrong walked away from yet another life-or-death situation as a lunar landing training vehicle he was piloting began to have control failure 200 feet off the ground. Armstrong had to fire his ejection seat and parachuted to the ground safely.

Armstrong was named commander of the Apollo 11 spacecraft , the first to send men onto the surface of the moon , on January 1, 1969. The astronauts accompanying him were Edwin “Buzz” Aldrin and Michael Collins.

“The eagle has landed,” radioed Armstrong back to Earth as the spacecraft landed on the moon on July 20, 1969 at 1:04:40 p.m. Pacific Daylight Time. The New York Yankee Stadium had 16,000 fans standing up to cheer the country’s victory. It was during his famous three-hour walk on the moon that he stated the famous quote, “That’s one small step for man, one giant leap for mankind.” An estimate 600 million people worldwide watched and listened to the moon landing, the largest audience for any single event in history.

The Apollo 11 mission was Armstrong’s last space flight. The next year, he was given a desk job as NASA’s deputy associate administrator for aeronautics in the office of advanced research and technology. Soon after, he left NASA to become a professor of engineering at the University of Cincinnati.

Armstrong was known for keeping away from the public eye along with his wife since 1999, Carol, as they lived in the Cincinnati suburb of Indian Hill.