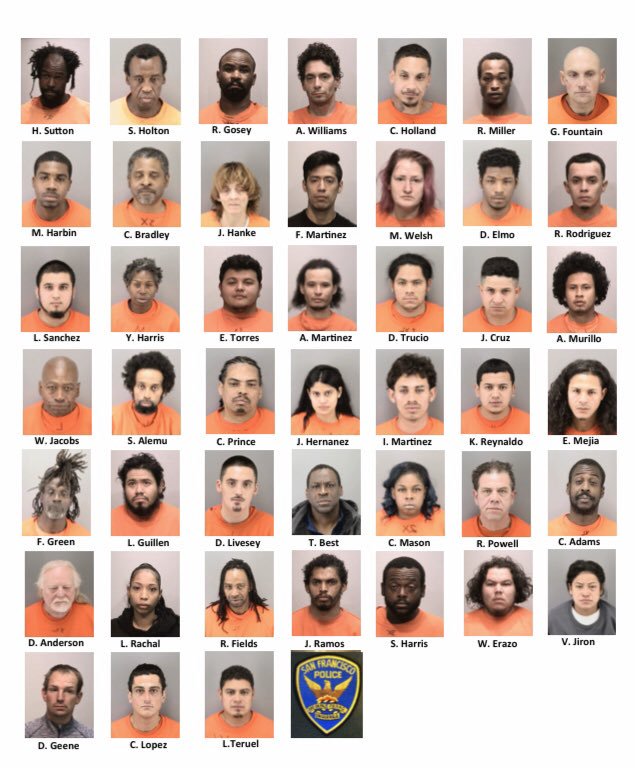 SAN FRANCISCO—Officers from the Tenderloin District and the San Francisco Police Department Narcotics Unit boasted a large number of arrests that took place over the course of the past week. According to the SFPD Twitter page, 14 of the 59 arrests led to a boost of 500 arrests of suspects for drug dealing in the region.

“Tenderloin & SFPD Narcotics Officers arrested 59 in the District over the past week: The below 45 suspects were among those booked. 14 additional suspects were arrested for dealing drugs in the TL this week bringing our 2019 arrests for drug dealing alone up to nearly 500 YTD,” tweeted @SFPDTenderloin.

Some of the suspects arrested have become repeat offenders, like Ismael Martinez. The 21-year-old was released under “OR” for the sale of narcotics and returned to the Tenderloin area where he was first arrested in November 2019. He was rearrested in December for the same crime. Authorities found multiple substances on Martinez, including 10 bindles of heroin and 9-coin bags of methamphetamine.

Vincent Chan was arrested November 2018 for being a felon in possession of a stolen firearm. In November 2019, Cahn was taken into custody by authorities for a second time. Authorities posted on November 20 via Twitter the following:

“He was again armed w/a loaded, stolen semi-auto handgun at the time of arrest.  He was also a fugitive for firearms & on probation for being a felon in possession. TL firearm arrests are ⬆️36% Vs 2018 YTD.”

Randy Gosey was charged with aggravated assault twice within 90 days. His first assault involved chasing a person with a knife in each hand in August 2019. He was arrested again in December 2019 for another knife assault.

Officials in the Tenderloin District began their round-up in February 2019. The SFPD called the effort the “Fugitive Recovery Operation.” Officers arrested over 50 people for outstanding warrants, drug dealing, burglary, and aggravated assault.

Citizens of the Tenderloin District are unaware of the number of felons who come back to the area after being arrested. The repeat offender issue, coupled with a massive mental health and substance abuse problem has given the region the title of being one of the poorest, and dangerous districts in the city.

The San Francisco News spoke with a source at one of the largest community-based organizations in the area, called Glide. Glide was established in 1929 and has been on the frontline in the area of the Tenderloin District servicing people from all backgrounds. The organization have fought for better living conditions and seeking to close the gap in poverty, as well as provide resources to the community and other disenfranchised members of the city.

When asked about the recent mass number of arrests by police in an effort to make the area safer, the source said, “We understand that the police are part of the solution but the old solution of just the law and order approach, the war on drug approach, trying to solve the issue with just policing… we’ve had enough experience to know that it doesn’t work.”

“There might be a temporary interruption of drug dealing for a moment but studies show that more likely than not they are inadvertently causing more harms,” the source added.

The source indicated that new legislation like Mental Health SF and additional city funding will help combat issues in the region.