CLACKAMAS COUNTY, OR—Residents in Clackamas County have decided to take the law in their own hands, leaving death threats in evacuation zones for those who attempt to loot in the region. Signs that read “Home and Armed. You Loot we Shoot” were reportedly seen all over the county. Devin Eskew, a photographer for the KTUV news took photos of the signs that hung along the country roads between Colton and Estacada. 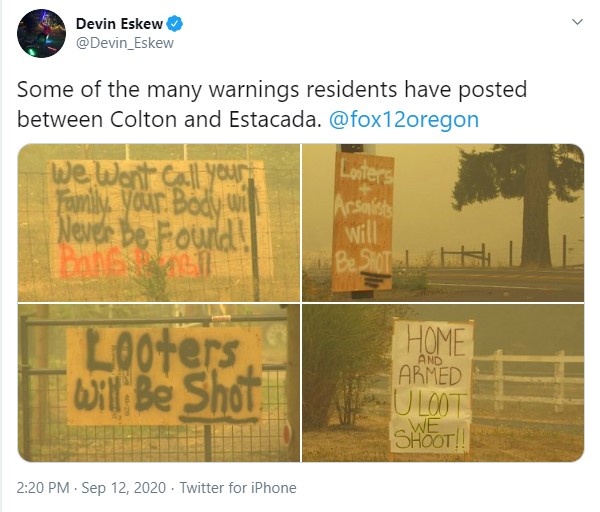 There are currently four major wildfires burning across 900,000 acres in Oregon raising level three evacuation warnings in most of Clackamas County. The Oregonian reported over 100,000 people ordered to evacuate, but some are hestitant because of alleged “rumors” of looters and suspicous vehicle sightings have spread “almost as quick as the wildfire.” The alleged rumors began after a Clackamas County Sheriff’s Deputy was recorded responding to a claim that Antifa was spotted lighting a barrel on fire in Sandy Creek. The deputy was criticized and put on leave for encouraging the public to take action.

“As soon as I was made aware of this incident, I moved swiftly to place this deputy on leave while we investigate,” said Clackamas County Sheriff Craig Roberts.

While the rumors in Clackamas have neither been confirmed or denied, there have been arrest for arson in Portland. On Sunday, September 13 a man was charged with igniting six brush fires along the I-205. The suspect, Domingo Lopez Jr. used Molotov cocktails to start the fires, which were discovered at the scene. Molotov cocktails are a common weapon used by Antifa during riots.