PORTLAND, OR—A man was charged with igniting multiple brush fires by using Molotov cocktail including the one along the west side of the I-205 freeway on Sunday, September 13.

At 3:37 a.m. on September 14, Portland Police East Precinct officers responded to six fires reported to transpire along the west side of the I-205 freeway. Portland Fire and Rescue extinguished three of them, and a passersby did the other three immediately, according to the Portland Police Bureau. No one was injured and no structures were burnt.

Officers arrested a suspect of the fires Domingo Lopez Junior, 45, who had a lighter as evidence. He was charged with six reckless burnings, and transported to a hospital on a Police Officer Hold for a mental health evaluation. 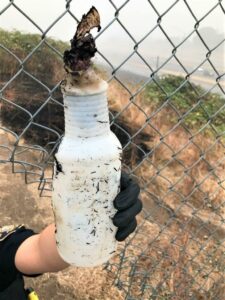 Domingo Lopez Jr. had been already charged for a brush fire in the 9600 block of East Burnside Street, on Sunday, September 13 at 4:35 p.m. The first fire was also extinguished by Portland Fire and Rescue with assistance by East Precinct officers, and no one was injured and no structures were damaged, according to PPB.

About an hour after the fire was extinguished, Lopez Jr. was arrested and he admitted he lit the fire with a plastic bottle with a wick, which the officers seized as evidence.

The suspect was booked into the Multnomah County Detention Center on charges of Reckless Burning and Disorderly Conduct in the Second Degree. Arson investigators will determine if other charges are warranted noted the PPB.

Wildfires have been burning in dire condition in Oregon. More than 30 active wildfires have burned 900,000 acres in Oregon, the New York Times reported. “The Beachie Creek fire, a blaze south of Portland that has destroyed almost 200,000 acres and killed four people, continued to burn uncontrolled on Monday morning.”