UNITED STATES—The Littlestown, Pennsylvania School Superintendent issued an apology on the Littlestown Area Schools website for yearbook pictures of students that were inadvertently blurred out.

The yearbook pictures depicted  came out in the spring for Littlestown Senior High School in Adams County, Pennsylvania just before school lets out. Gebhardt and his friend’s hats were blurred out from the pictures, and no logo is visible. 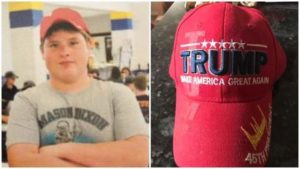 Jossie Carbonare of Fox News 43, interviewed the Gebhart and his mother.

“I just think he really just wants to help out our country and I think he is,” said Lorraine Gebhart

“I was infuriated because he wears that hat because he supports our President. He’s not doing anything illegal whatsoever. He wearing a hat of support.”

“Everyone has First Amendments Rights, right? They have freedom of speech, think what they want, say what they want, but they’re not allowed to take someone else’s,” said Jeremy.

“It is okay to disagree with people’s views, but it is not okay to use your freedom of speech and use it to take away someone else’s,” Jeremy’s mother added. “You did not silence us.”

The Superintendent of Littlestown Area Schools wrote a public apology on the school district’s web page. The incident is currently under investigation.

I am aware of the yearbook situation and a mistake was made.  The mistake was not noticed during the editorial preview process prior to print.   We apologize on behalf of the yearbook club.  It is not the policy or practice of the district to improperly censor speech. Please understand we are working with young adults who are practicing to become citizens and what a better place to do so than in a school setting.   We must find a way to have civil discourse around emotionally charged issues with students where the facts are understood and the opportunity to learn is available.