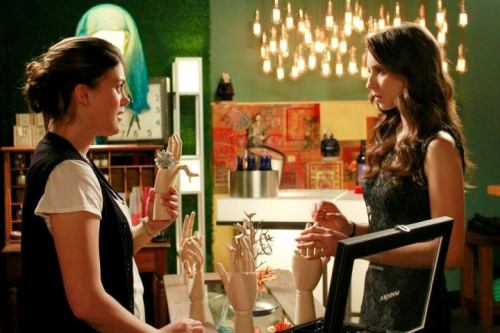 HOLLYWOOD—How in the world does this series continue to keep the audience on the edge of its seat each week amazes me, but episode 11 “Single Fright Female” revealed more about Paige’s (Lindsey Shaw) double life.   The episode opened with Hanna (Ashley Benson) and Spencer (Troian Bellisario) discussing ways to hide Hanna’s leg wound.    Spencer inquired about Hanna’s burgeoning relationship with Wren, just as Ted informed Ashley (Laura Leighton) he found a flash drive at the church that contained videos of the girls being watched.   This immediately sent Hanna into damage control as she attempted to protect the videos from being leaked to the police.

Aria (Lucy Hale) attempted to liven up Ezra (Ian Harding) on his birthday, but he wasn’t in the mood.   Aria was determined to get in touch with Maggie to find out just how she was doing.   Emily (Shay Mitchell) told Paige that she kissed Nate (Sterling Sulieman) and she took the news fairly well considering she already knew about their tryst.    Spencer was on high alert when she saw Cece (Vanessa Ray) at her school; later discovering that Cece knew of a relationship Paige and Alison had in the past.   Alison was physically beat up by Paige, who she nicknamed Pigskin.    Hanna and Caleb (Tyler Blackburn) continued to be coy about their relationship in public.   A huge revelation of the night came when Aria came face-to-face with Maggie and met her son, who just so happens to look like Ezra.   Could it be Ezra is a daddy?

Nate continued to demonstrate disturbing behavior first with Emily, then with Jenna and Hanna.   Something is not right about him and I’m starting to sense Maya really wasn’t his cousin.    Emily questioned Paige about her past with Alison and she got defensive, pointing out that perhaps one of the “liars” may have been the one who betrayed her.   Hmmm, any guesses who that might be?    Aria confessed to Wesley she met Maggie and informed him about her son, both were stunned that Ezra has no idea!

Someone unleashed a venomous snake on Spencer as she changed in the dressing room.   This “A” is not playing around.    Spencer placed Paige at the top of her “A” list, but Hanna wasn’t buying it.   Hanna and Emily begin speculating just who took the knife they found in Maya’s bag at Noel’s cabin.   Looks like Paige might be the guilty party, but that’s just way too easy.   All of the liars except for Aria, assisted Cece in her fashion gala, but did not expect Paige to be at the party as well.   The conversation between Spencer and Paige was super awkward.    Hanna and Spencer devised a plan to search Paige’s purse which fueled Emily with rage, what the girls found was a shocker.   The missing earring that Aria received from “A,” but the kicker is that earring was found in her dad Byron’s office!   I’m starting to think that Byron is the one who will betray the liars this season; he has to be connected in some way and just what was Paige doing in his office to begin with?

Paige decided after the incident to confess all to Emily about her past with Alison even admitting that she contemplated suicide.   It felt extremely sincere; then again it could have been a huge act on her part.   Ashley informed Hanna she watched the videos on the flash drive and saw footage of her and Detective Wilden; where has he been the last few episodes anyway?   She chose to destroy the evidence in the garbage disposal.    Jenna came to warn Emily about the person she spends time with, but upon realizing she was not alone, booked right out of town.   Was she warning Emily about Nate, Paige or someone else?

The episode concluded with what audiences have been speculating for almost two years, that there has to be an “A” team.   As a song was chosen on the juke box, a mysterious someone passed off the apartment key to someone else dressed in a black hoodie and gloves.   Okay “PLL” fanatics, next week’s summer finale will reveal an epic betrayal.   Who do you think will betray the liars?   Is it Ezra, Melissa, Lucas, Paige, Caleb, Byron or perhaps one of the liars?   Share your thoughts to me at ladale@canyon-news.com.   Next week will be a stunner!