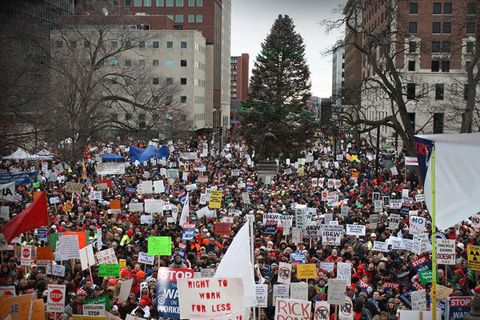 UNITED STATES—For those of you who are not already aware, Michigan has joined the ranks of countless other states to become a ‘Right to Work’ state.  It was something that was splattered over many news stations in the recent weeks.  There were tons of outcries from unionized workers fighting for the rights that so many others have fought so hard for in addition, to protect working class families.   We can debate for days, weeks, months even years about the issue, without coming to a common ground.
The primary gripe with this legislation is that it was done in such an inappropriate manner it caught citizens, and members in Michigan legislation off guard.  It was almost as if the Republicans were attempting to pass legislation without anyone discovering what was intended.  For the most part that is exactly what took place, and it caused citizens to unite in ways never expected.  More than 10,000 people protested in Lansing on Tuesday, December 11 as the governor signed the ‘Right to Work’ legislation into law.
A huge controversy occurred a week before, as protestors were denied access into the Capitol Building which sparked even more outcry.  The big issue with protests is most of them turn violent. For the most part protestors at Tuesday’s event were well behaved, but a few incidents were captured on film.  One incident involved protestors destroying a tent of individuals in support of the ‘Right to Work’ law.  There were two other incidents that were a bit shocking.
The first involved a Fox news contributing reporter who was assaulted by a protester that was not happy with his tactics.  That same reporter was later verbally assaulted by another protestor who informed him to keep his distance from him.  It took a few expletives for the reporter to oblige, but ultimately he did.  It appeared that individuals against the law just wanted their voice to be heard.  Tensions tend to flare when heated issues come to the forefront, but I wonder can people protest in peace without violence emerging at the forefront. In my honest opinion, I do not think so.  The days of Martin Luther King Jr. are long behind else.  He fought for us as a nation to protest with peace not violence, but the emotions of some people get the best of them.
We have to be able to voice our opinions and also hear the opposing side’s argument without getting so emotionally engaged in our fight that we explode with rage. The First Amendment allows us the right to assemble, but in doing so we have to be careful to use that right to the utmost integrity.  As someone once told me it’s easier to kill someone with kindness than with anger.  People sometimes just don’t know how to react when they don’t receive the reaction they are expecting.