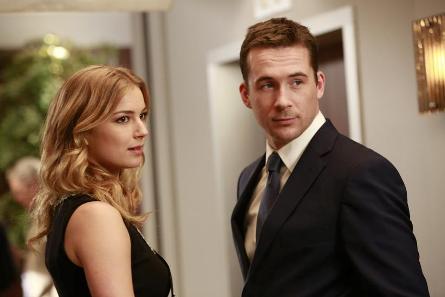 HOLLYWOOD—If there is one thing audiences can always count on is for “Revenge” to have an epic cliffhanger to draw the audience back in the coming weeks. Episode nine ‘Revelations’ did not disappoint, with quite a few bombshells that are sure to have conversations in the cooler room for days to come.  The episode opened foreshadowing something sinister as bothVictoriaand Conrad engaged in sharpening their shooting skills.

Nolan, Emily and Aiden plotted ways to protect Nolan Corp. from falling into the wrong hands. Jack began planning festivities for his son’s christening, as Declan’s hunch of something not being right with their new partners disrupted his nerves.  Conrad’s devious employers made threats that unnerved him as they threatened Daniel’s safety;Victoriadidn’t take kindly to those threats and let it be known she will kill with an iron fist if harm came to any of her children.

Nolan played matchmaker with Daniel and Ashley about the acquisition of his company, which left Nolan stunned to see his former flame in the room. Daniel made threats that are indeed going to come back to haunt him as he obtained Nolan’s company.  Emily discovered Ashley’s misdeeds which involved a tryst with Conrad.  Checkmate.   Never count this woman out. Just when you think she’s cornered, she always has an ace up her sleeve.  To sayVictoriawas stunned after watching the video would not do the queen bee justice.  She dropped a bombed on Conrad, which did not fade him much.  He informed her of the true intention of the video which only forced her to oblige with his demands.

Aiden was a bit threatened by Emily’s relationship with Jack.  It was a happy ceremony at the christening, yet a somber one as Emily watched Amanda get the fairytale ending that was due to her.  Matt Duncan, a friend of Carl (Jack’s father) warned him to get out of his deal with the Ryan brothers.  Looks like Jack may heed the warning.

Victoria and Ashley had a heated discussion about her discretions with Conrad and Daniel.  Ashley was indeed upset about the video, begging her nemesis to keep her secret.  Ashley was not happy withVictoria’s intentions, just as Jack asked Nolan to pry into his investors past.  Ashley showed up atSalvador’s suite ready to seduce the all important vote, but did not expect Daniel to show up and demolish Conrad andVictoria’s plan.

Victoria and Conrad begged Daniel to call off the all important meeting for control of Grayson Global.  Matt paid Declan a visit to discuss some very important details, but found himself being watched by the Ryan brothers who were not to happy to see Matt discussing their past with Jack.  They are well aware that Matt was responsible for their father’s death.  Emily and Aiden learned that Daniel is now CEO of Grayson Global.  Daniel broke the news to Aiden that he has no room on the board for him, which Aiden was not happy to hear.

Jack was stunned to hear the news about his business partners and what happened to Matt who was brutally beaten by the Ryan brothers; before taking his last breathe, Matt confessed the truth to Jack about what happened.  Later that evening the Ryan brothers paid Jack a threatening visit, which unnerved Amanda.  Nolan invited Padma to participate is his plan to take down Grayson global and Daniel from the inside down.

After doing some digging on the boat, Jack found the gun that was used to murder the Ryan brother’s father.  Daniel’s ego is going to be his downfall as he reminisced about his past with Ashley and Emily; unfortunately for him neither is available.  The initiative began their demise of Grayson Global as they watched him from inside his office. Victoriacalled Emily asking for her assistance with Daniel. While the mid-season finale didn’t blow my socks off, it did leave me with a strong impression of what surprises are expected to come the rest of the season.  Enjoy the holidays “Revenge” lovers.  New episodes do not return until January 6, 2013!