CALIFORNIA—The San Diego Comic Convention known as ‘Comic-Con’ announced this year’s event will be virtual. The event will begin on Wednesday, July 22 through Monday, July 26. The event is free for all the participates and there is no limit on how many people can attend.

San Diego Comic-Con is a nonprofit public benefit corporation with a 50-year history in California. It started with exhibiting the founders’ comic books, and some other forms of popular arts including films, science fiction and fantasy literature. In 1972, the event was named “San Diego’s West Coast Comic Convention.” It became “San Diego Comic-Con” at its fourth annual event, in 1973. The event changed their name to Comic-Con International: San Diego in 1995. 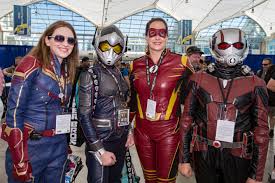 Comic-Con has been held at the new San Diego Convention Center since 1991. Due to the huge population of participants, the event expanded to include the outdoor parks and local hotels. Before, the show was home at El Cortez Hotel in downtown San Diego and the Convention and Performing Arts Center.

In April 2020, the annual San Diego Comic-Con was canceled due to the ongoing coronavirus pandemic. Later in May, the organizers indicated that they already had a replacement for  Comic-Con 2020.

David Glanzer, the spokesperson at San Die Comic-Con, sees the virtual convention this year as an “opportunity.”

“For the first time in our 50-year history, we are happy to welcome virtually anyone from around the globe. Though stay-at-home conditions make this a very difficult time, we see this as an opportunity to spread some joy and strengthen our sense of community,” Glanzer told Collider.com.

No additional details on the virtual Comic-Con.