SAN FRANCISCO−Mayor London Breed announced on Thursday, May 28 that she would be extending the stay-at-home order indefinitely as the city slowly begins to reopen. 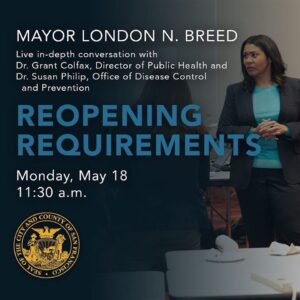 During Thursday’s news conference Mayor Breed said, “The only reason why we are in this situation in the first place is that most San Franciscans took the (stay-at-home order) seriously, and you’ve done an amazing job complying with the order. ”

“So, we wouldn’t be here if most people didn’t cooperate.”

San Francisco’s Public Health Director, Dr. Grant Colfax indicated that as the city started to reopen the economy each resident would be responsible for carrying on with healthy habits in order to slow the spread of the virus.

“That means covering your face,” Colfax said, and keeping social distance and getting tested if you have any symptoms. These actions have saved lives and are going to be more important than ever as we start to move around the city again.” 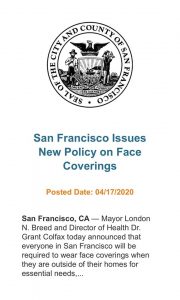 San Francisco officials required residents to wear masks on April 17, if they left the house for any reason. In the new plan, runners and those involved in other outdoor exercises will be required to wear a mask.

The reopening plan for San Francisco will begin June 15 and include curbside service, and access to botanical gardens and outdoor museums, expanded child care, and outdoor exercise classes. 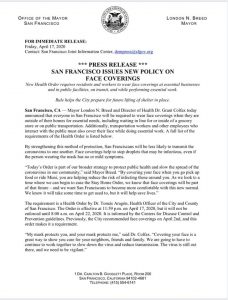 The next phase would begin no later than July 13 with some modified indoor dining along with the opening of hair salons and barbershops.

In the plan, id-August should allow the opening of bars, nail salons, tattoo parlors, and schools with limitations.

The last phase has no certain date in mind that would include large gatherings, sporting events with a large fan base, night clubs, festivals, and tourism with all the hotel/motels, and tourist shops.