Case number 19-1392 is between Thomas E. Dobbs, State Health Officer of the Mississippi Department of Health, et al., Petitioners and Jackson Women’s Health Organization, et al which was first filed in December 2020, and postponed until June 9. 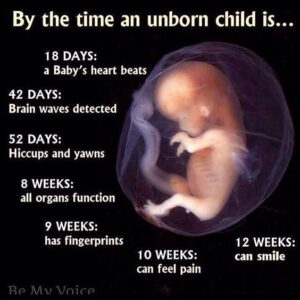 The case involves Mississippi law that would protect babies from abortion from 15 weeks gestation. The petitioners argue the viability of the life along with the possible physical and emotional danger to the mother, while the opposition considers abortion a woman’s right to choose.

Alabama State Coordinator for the International Silent No More Campaign, Team member of Rachel’s Vineyard, National Lobbyist, spokesperson, and victim of a botched abortion, Jacquie Stalnaker OSB noted at 15 weeks an ultrasound may be able to determine the baby’s sex. The baby has eyebrows, eyelashes, fingernails, toenails, and hair. The fingers and toes are well defined. Some mothers have caught their babies sucking their thumbs, yawning, or stretching, or making faces during their ultrasounds.

The attorney for the petitioners is Scott Grant Stewart of Jackson, MS. The petitioner, Dobbs has “brief amici curiae” that have been filed by multiple petitioners including: the Roman Catholic Diocese of Jackson, MS., The Roman Catholic Diocese of Biloxi, MS., The American Center for Law and Justice (ACLJ), the states of Texas, Alabama, Alaska, Arizona, Arkansas, Georgia, Idaho, Indiana, Kansas, Kentucky, Louisiana, Missouri, Nebraska, Ohio, Oklahoma, South Carolina, Tennessee, and West Virginia.

Father Frank Pavone and Director of Priest’s for Life will also be providing the courts with information on the case.

One brief amici curiae was filed in opposition by Jackson Women’s Health Organization. Abortion is reportedly the leading cause of death in the United States. Research indicates 647,457 Americans died from heart disease. A total of 1.7 million died from HIV/AIDS and in 2019, 62,502,904 individuals died from abortion.