SAN FRANCISCO──The San Francisco Police Department have arrested a suspect who stole a dog back in December 2019. According to the SFPD, on December 14, 20219, at approximately 9:12 a.m. officers from the Ingleside Station responded to the 400 block of Cortland Avenue about a dog being stolen.

The victim, a 31-year-old resident of San Francisco informed authorities she left her dog, “Jackson,” tied to a bench while she went inside a grocery store. An unknown suspect stole the dog, a 5-year-old black, white and gray Mini Australian Shepherd with blue eyes. 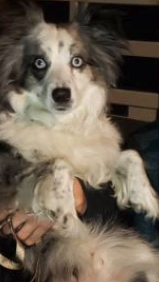 Over the past five months, investigators from the SFPD Burglary Detail worked to author several search warrants, examine video footage, and follow-up on potential leads. Jackson was spotted in Los Angeles County by community members. The incident details were given to law enforcement, which facilitated key leads in identifying the suspect responsible for stealing the dog. An arrest warrant for grand theft was issued.

On April 17, 2020, Nicholas Bravo, 27, of Palmdale, was arrested for felony grand theft. He was already in custody at San Joaquin County Jail for matters unrelated to Jackson’s theft. Bravo was cited to appear in San Francisco Superior Court this summer.

On Monday, April 20, the lead SFPD investigator was notified that Jackson had been surrendered to Los Angeles County Animal Care and Control in Palmdale. The animal was retrieved from the shelter by a close family friend and taken to Santa Monica, where he was recovered by SFPD and driven back to San Francisco. On Tuesday, April 21, the animal was reunited with his owner one week after his sixth birthday.