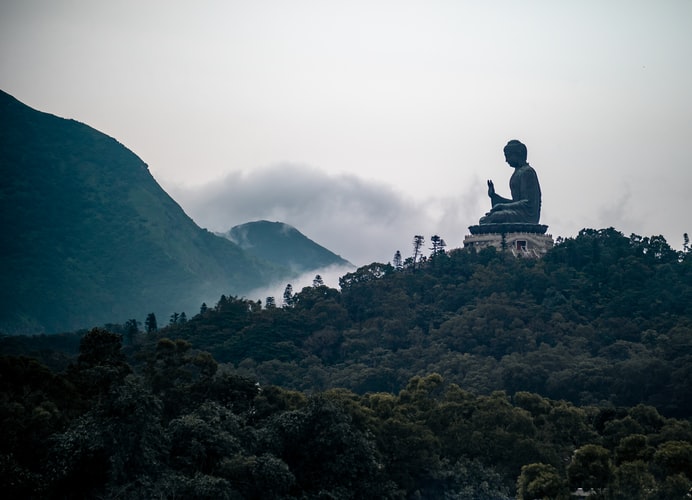 UNITED STATES—1. The Two Buddhas. “Are you, as a teacher, able to learn something new?” asks Buddha #1.

“You need to give people a chance to take off their shoes before you suddenly bark out the very instant they cross the threshold, ‘TAKE OFF YOUR SHOES!’” says Buddha #1.

“Look at you, you came in past the entry and plunked yourself down practically in the living room.”

“I speak in general for your benefit in dealing with the general run of humanity. As for me I am lazy today and ran for the nearest chair. And this is about many more hosts encountered who share that habit of almost aggressively saying take off your shoes. Has it ever happened to you?”

“Don’t you get ruffled? It’s kind of an insult not leaving one the chance to get there bearing and see, perhaps the row of enough shoes for a ballet troupe already line up on the floor. The moments they blurt out, ‘Take off your shoes before you come in,’ the moment you step over the threshold, isn’t the first instinct to punch somebody and dislocate their jaw.”

“I haven’t reacted perhaps so violently,” says Buddha #2. “But I see your point. I have felt miffed from time to time about similar things. Might it not be nobler to silently endure the more minor spoken follies of people?”

“It is the path I have mostly chosen,” says Buddha #1.

“Thank you,” says Buddha #1, and adds with a little wiggle of the finger: “Your nose is sticking out over your mask.”

Pow goes the fist of Buddha #2. Birds and stars circle around the head of Buddha #1.

2. The Russians Are Staying

The shutters were black for many weeks and their wasn’t the least token of habitation. The garbage cans didn’t go out, nobody smoked on the porch. The last person, the cowboy actor remembered seeing was a rubicund man from Vladivostok, out smoking on the porch. That was months ago. Or weeks ago. Same difference the way time was melting away.

Then another neighbor told the cowboy actor, “The same people are still there. They are stranded because of the quarantine, waiting for a flight back home.” The neighbor who was very helpful and very observant told how the man and woman from Russia were sitting in the dark and smoking. She had gone over to say hello, and the guy had only said, “No English.”

The cowboy actor was troubled that this couple’s only memory of America we of being cooped up in the darkness, watching TV.

The next day he was seized by a need to knock on their door and say howdy. During the day, however, it was never inviting. The screendoor masked a black grotto even in daylight. It got to be late at night after as full a day he could have, now that there were no productions, doing odd jobs around some stables in the Valley.

He parked and had a notion to have some tequila. He was going to drink it alone. And then he dared himself all the way into knocking on the reclusive neighbors’ door, armed with all of two words, “Priviet” (hi) and “Tequila.” The cowboy actor did directed by the voice of a director he didn’t know he had.

“I better do it. I won’t ever feel good if I don’t. Heck, if I or somebody doesn’t do something, these people could get into some real domestic strife or something. Plus I want to show them the warm, wonderful face of the United States.”

“Tequila?” the cowboy actor said of knocking on the screen, he put a lot of question into it.

“Oh no,” said the Russian, barely visible in the dim TV glow.

It was cringeworthy, ever second a painful burr.

“Tequila. Mexican vodka.” He held it up, the golden liquid glimmered.

Well wouldn’t you know, before the night was over they’d exchanged Instagram accounts, exchanged cowboy hats and had connected in who knows what fluid language, they shared their lives and hopes.

The next even they were gone, maybe too tired out. The next morning he looked on his phone modeling sombreros in Tijuana and posing in from of the donkey. They had found their America…

Grady Miller is the Wizard of Fiction.