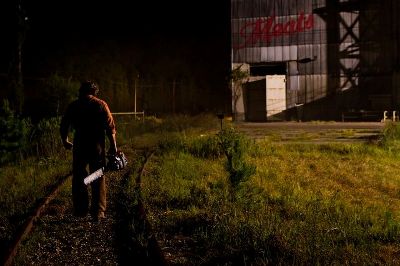 HOLLYWOOD —It’s been nearly seven years since horror icon Leatherface graced the big screen in the disastrous “Texas Chainsaw Massacre: The Beginning.” Let’s not even spend any time entertaining that film.   Horror buffs out there will be pleased with the unveiling of the next chapter in the horror saga “Texas Chainsaw 3D” which released its first trailer today.

Trust me when I say the movie looks promising and I don’t say that often about horror pictures as over the past decade most of them have been disasters.   Let me be clear: this is not a remake of the 1974 classic, but a direct sequel of the original that picks up where that one left off.

The movie stars Heather (Alexandra Daddario) as a woman who recently discovers that she is adopted. She receives news from a lawyer that a grandmother that she never knew has left her a lavish mansion.   Being naïve, she and her friends take a trip to the mansion and while exploring they release psychopath Leatherface (Dan Yeager) on the loose to saw a few people in half.

The trailer definitely presents little to any information about what takes place in the picture which is nice; the less you know the better.   It just creates more anticipation for the flick.   We get glimpses of Leatherface wielding a massive chainsaw and chasing Heather and her friends in and around the house. Other notable players in the movie include Tania Raymonde, Trey Songz, Shaun Sipos, Scott Eastwood, Thom Barry and cameo’s by Marilyn Burns and Gunnar Hansen who starred in the 1974 classic.

The movie hits theaters on January 4, 2013 and is being released by Lionsgate. It will be presented to audiences in 3D.   I know what you’re thinking just what we need another 3D picture. The difference here is the movie was actually shot in 3D not converted so the 3D is likely to heighten the picture itself for audiences.  Don’t take my word for it check out the trailer below.    http://www.youtube.com/watch?feature=player_embedded&v=GqCe2pDfICE#t=0s
By LaDale Anderson