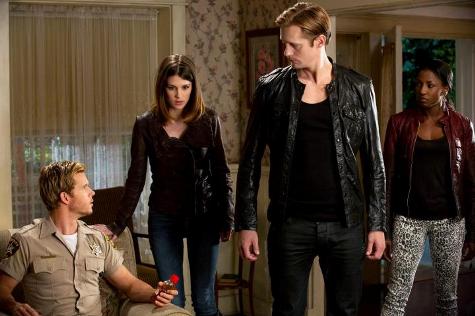 HOLLYWOOD—Sunday night’s season five finale of “True Blood” was a bloodbath to say the least.    Episode 12 “Save Yourself” raised the stakes in terms of just where some relationships stand. The episode opened with Russell (Denis O’Hare) honing in on Sookie (Anna Paquin) and the faeries; the situation looked dire as Russell was just too powerful for them, but Eric (Alexander Skarsgard) saved the day by implementing the True Death to Russell, once and for all.   Nora (Lucy Griffiths) came inches from tasting Sookie, but Eric made sure to halt that.   Jason (Ryan Kwanten) saw visions of his parents informing him to kill all vampires.

Bill (Stephen Moyer) came face-to-face with Sam (Sam Trammell) who shifted into a fly to escape.    Tara (Rutina Wesley) informed Eric and Nora of Pam’s (Kristen Bauer van Straten) location.    Tara, Eric, Nora, Sookie and Jason all devised a plan to infiltrate the Vampire Authority headquarters to save their loved ones.   Luna (Janina Gavankar) and Sam reunited with each other and devised a plan to save Emma.

Alcide (Joe Manganiello) encountered a crazed Ricki who had been forced to drink vampire blood.   His father assisted by providing a drug that would force the vampire blood out of her body.   His father later provided Alcide with some blood that was sure to allow him to go toe-to-toe with JD.   It was a fight for the ages as Alcide put a beating on JD, then snapping his neck; giving him control of the werewolf pack.

Arlene, Holly and Lafayette shared some cocktails as they watched the birth of Mirella’s children.   It was the only story arc of the night that had a bit of comedy; I was secretly hoping Lafayette would reunite with Tara just to hear some sensational dialogue between the two. Luna choose to shift into Steve Newlin (Michael McMillian) in order to rescue Emma, but Rosalyn (Carolyn Hennessey) spotted him and forced him to the television airwaves, where her true identity was revealed.   Sam flew inside Rosalyn and delivered her the True Death as well.   All looked well, until Luna became gravely sick; forgot she had already shifted into both Sam and Steve; things did not look good for her.

Once inside the headquarters, Jason went ballistic killing as many vampires as he could, providing ample time for Sookie and Tara to rescue Jessica (Deborah Ann Woll) and Pam.   After being rescued, Pam and Tara gave into temptation and kissed.   Salome (Valentina Cervi) decided to drink all of Lilith’s blood, unaware that Bill had tainted the blood with silver.   He attempted to persuade her not to do so, but she didn’t listen, he then put her out of her misery.   Jessica, Jason, Tara, Pam and Nora escaped to the rooftop while Sookie and Eric went searching for Bill.

Bill actually kept Lilith’s blood to himself, that little devil he is.   Eric and Sookie did their best to convince Bill to end this charade.   Sookie balled in tears hoping to break through to her former lover, but it was no success.   Bill ultimately chose to drink all of Lilith’s blood which led to his death!   Couldn’t believe my eyes they actually killed a main character from the series, but it wouldn’t be “True Blood” without a twist right?   As Sookie and Eric looked at the pool of blood, Bill suddenly re-emerged looking more powerful and evil than ever.   Eric instructed Sookie to run for their lives.   Well that’s a wrap “True Blood” fanatics, season five was a stellar one, now I’m just wondering what the writers have planned for season six.   Until next summer!