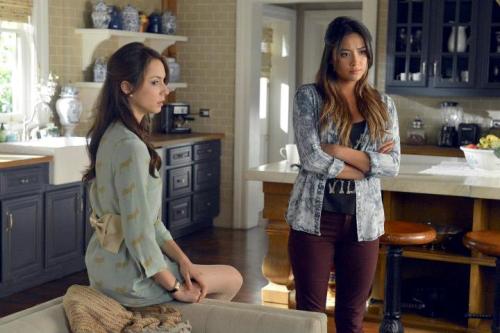 HOLLYWOOD—“Pretty Little Liars” wrapped up its summer finale with episode 12 “The Lady Killer” and what a fantastic night of television was it.   For weeks, viewers had been teased about an epic betrayal that would take place against the liars from someone they know.   Who would have guessed in a billion years that Toby (Keegan Allen) is apart of the “A” team?   Precisely!    The smartest detective in Rosewood, Spencer Hastings (Troian Bellisario) has no idea her boyfriend has been working to torment her, her family and friends.

The episode kicked off with an ambulance loading two bodies into the truck.   Hanna (Ashley Benson) is sobbing uncontrollably as Spencer and Aria (Lucy Hale) comfort her, while Emily (Shay Mitchell) is questioned by police.   Rewind to two days earlier, where Spencer, Hanna and Aria are deciding how to approach Emily regarding Paige (Lindsey Shaw).   Emily was not interested in hearing anything her friends had to say.    Aria revealed to Hanna that Ezra (Ian Harding) has a child he doesn’t know about.    Perhaps the smartest line of the night came from Hanna who revealed “Secrets tear us apart.”   Hanna they indeed do.   Emily revealed to Paige everything about the new “A,” moments later Paige got a suspicious text and took off.

Mona (Janel Parrish) found a way out of the mental hospital dressed as a nurse (I can sense trouble from a mile away).   “A” compelled the girls to meet them at Alison’s grave to solve the mystery once and for all.   To make things tenser they sent a picture of Ali’s body bag.   Caleb (Tyler Blackburn) showed up at the house and informed the ladies that he would be working beside them. Emily decided it was safer for her to leave town with Nate (Sterling Sulieman), little did she know he had ulterior plans.   Spencer was ecstatic to see Toby back in town and the duo took their relationship to the next level.

Aria and Ezra both received a bombshell when Maggie arrived at his apartment. Both ladies played coy about knowing each other.   Maggie begged Aria to not reveal her secret to Ezra as there is more to the story that she doesn’t know. Intriguing factoid, I’m dying to know exactly what she means.   Hanna lit a fire into Caleb after she realized he planned to bring a gun to confront “A.”   While Hanna snuck into Emily’s house to retrieve Maya’s bag, Caleb went into the drawer where he stashed his gun.   Audiences were treated to a secret lair where numerous pictures and evidence of the liars was splattered around the room.   Mona was seen taking orders as the elusive team member (Toby) rocked in a chair.

Emily received a threatening call from “A” warning her to get out of the house she was staying at with Nate.   While searching Nate’s things she found a letter with her return address written on it.    Nate returns from the woods with mysterious paint on his shoes which Emily remembers from a picture Maya sent her.   He’s Maya’s stalker!   Emily devised a plan to escape, but was caught and Nate revealed all, including his plan to murder Paige who was tied up in the closet.   Emily was able to retrieve a phone, while the liars alerted Nate of unexpected guests.

A chase ensued which led both Nate and Emily to the lighthouse where she stabbed him.    Caleb arrived to protect Emily, but ended up being shot in the aftermath.    It was revealed that Caleb was the one seriously injured in the ambulance truck, whereas Nate was killed.    The girls arrived at the hospital where it was revealed that all charges against Garrett were dropped. He smiled at the liars meaning he’s hiding something huge, and I’m dying to know what it is.

The episode concluded with Mona returning to Radley and revealing to her accomplice they have to get Maya’s phone back.   The camera panned to reveal Toby.   It was a huge shocker, unlike last season’s finale that revealed Mona to be “A.”   Now the questions come in full-force.   Why is Toby working with the “A” team?   What is in Maya’s phone that they need so desperately?   Did Nate really kill Maya or did someone else finish the job? Where is Alison’s body?   So many questions still to be answered.   Well “Pretty Little Liars” fanatics we’ll have to wait until January when the winter premiere of the series returns.   Until then we have the Halloween episode which is expected to reveal more juicy tidbits!