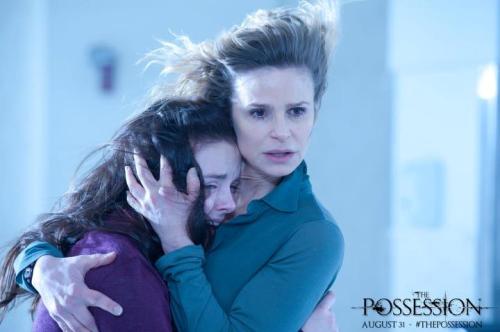 HOLLYWOOD —It’s been quite some time since a picture really sent chills down my spine.   “The Possession” a tale of a supernatural force possessing the body of a little girl is every bit of creepy as depicted in the trailers and TV spots.    The premise revolves around Em (Natasha Calis), who gets an old box from a yard sale and becomes intrigued by the idea of opening it.   Rule of thumb, if something is locked it’s usually for a reason.

Her father Clyde (Jeffrey Dean Morgan) hints that the box has been designed in a way to prevent its contents from being exposed, but little Em is determined to get the box opened and that’s when the chaos ensues.    There is nothing more frightening then seeing the innocence of a child disturbed and that’s what this movie does to the core.   Previous movies in this realm like “The Exorcist” and “The Exorcism of Emily Rose” address similar ideas.   Is there a way to stop and evil spirit that is hell bent on destruction?   To some degree yes, but in all truth is the spirit ever gone? No.

What the makes the picture riveting are the parents portrayed by Morgan and Kyra Sedgwick.   Both Clyde and Stephanie are recently divorced and those who encountered divorce understand the ramifications that it can have on a child longing for the love of both parents.   So in the beginning Em’s behavior is not depicted as out of the ordinary, but as time progresses the spirit inside her becomes more demonic and ruthless.   The parents unite to find out just exactly what this spirit wants and at what cost it will be to their daughter and themselves.

“The Possession” heightens its fear factor because in the promos it’s revealed that the tale is based on a true story which revolves around the Dibbuk Box; a box that is believed to contain an evil spirit from Jewish Folklore.    Weird phenomenon and stories have been connected to the Dibbuk Box.   All I have to say is after seeing this movie it’s a guarantee I will not possess any strange looking boxes, especially those that are locked.   Witnessing the taunting things our main character encounters at the hands of this box is difficult to explain with words; flying bibles, telepathic powers, birds, insects, hands crawling from inside the throat.   Just talking about it is creepy enough.

Supernatural films have a way of forcing the audience to address the unexplainable; there are things out there that just cannot be reasoned with science or ideology.   Things happen that are beyond are control and because of that it unnerves us even more as we want to know why.   “The Possession” is truly a dark picture that will open the spectators mind to the fact that unknown forces are out there, but the disturbing element is those forces appear to be after the innocence of a child.