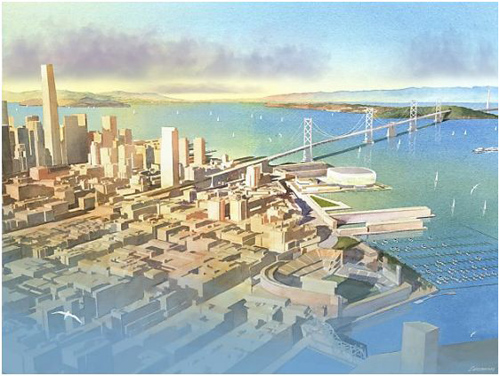 The Mayor’s office news release indicates the CAC is made up of residents and small business owners in the nearby communities of South Beach, Rincon Hill, Mission Bay and South Park.   In addition, there are community stakeholders with expertise on a variety of citywide topics, including housing, open space, youth issues, workforce development, organized labor, access for people with disabilities, non-profit administration, maritime commerce, environmental protection and transportation.

As part of the proposal, the City of San Francisco would enter into a long-term lease with the Warriors.   Upfront costs to refurbish Piers 30-32 that are estimated at $100 million would be paid for by the team, which will also privately finance the construction of the facility.   The proposed 17,000-19,000 seat arena would not only serve as the new home of the Warriors but also be the host of conventions, concerts and cultural events.   The arena would be ready for the start of the 2017-2018 NBA basketball season.

Lee commented in a statement on how the project will benefit the City of San Francisco.

“Public input and review is critical to the success of building a state-of-the-art, privately-financed, multi-purpose Warriors waterfront arena that will create jobs and strengthen San Francisco’s economy,” said Lee. “I look forward to working with the members of the Citizens Advisory Committee to develop a legacy project on our City’s waterfront that is inclusive and reflective of our diverse and world class City.”

For more information on the Citizen’s Advisory Committee for the Piers 30-32 project, please visit the web site of the Port of San Francisco at www.sfport.com