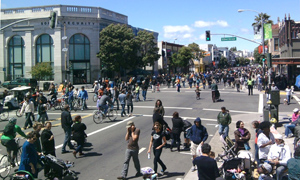 SAN FRANCISCO—On Sunday, August 26, the second annual Chinatown Sunday Streets and Ping Pong tournament was held along Grant Avenue.   This event reprised portions of the first Sunday Streets route in 2008 that connected Chinatown to the Embarcadero along Washington Street, according to the Mayor’s office news release.

This year’s Sunday Streets event invited the public to bring out their bicycles and people-powered wheels of all kinds to travel a route east from Grant Avenue along historic Jackson Street and Washington Avenue to reach the Embarcadero.  From there, participants could access the Embarcadero bikeway along the San Francisco Bay to reach the northern waterfront where the America’s World Series Final races were taking place.

Other activities held along the Sunday Streets route included Tai Chi classes by the Chinese Shaolin Center, free bicycle rentals from ParkWide LLC, an Exploratorium interactive display previewing their 2013 grand opening at Pier 15 and live music by Rin Tin Tiger and Against Leo.

SFMTA Director of Transportation Edward D. Reiskin commented in a statement before the event about its success.

“San Francisco residents, merchants and visitors have enthusiastically embraced Sunday Streets and are consistently asking us for more of these kinds of programs,” said Reiskin. “These events are a great way to explore areas of the city by foot, bike and transit.”