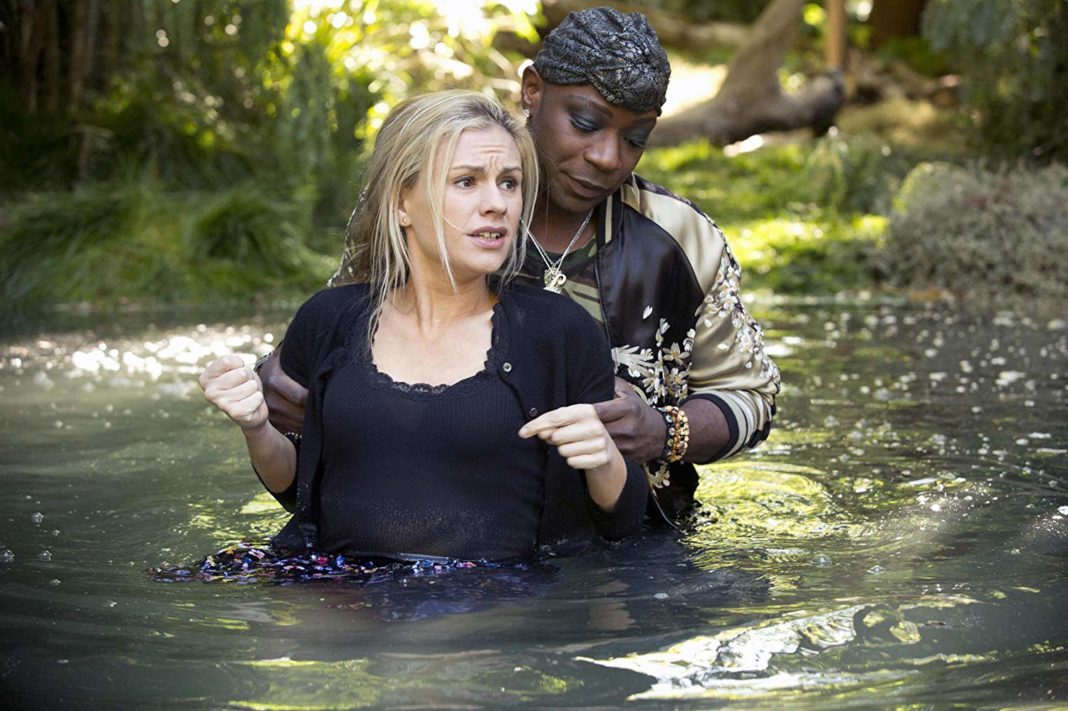 HOLLYWOOD—Last week’s episode of “True Blood” was indeed one helluva cliffhanger, that saw Bill (Stephen Moyer) ready to attack his prodigy, as well as Sookie (Anna Paquin) prepare to take out the vengeful Warlow/Ben (Robert Kazinsky).  Episode five, with a title that only “True Blood” could commence, ‘F*** The Pain Away’ picked up precisely where the last episode ended.

Sookie took the high rode and questioned Warlow about his reasoning behind killing her parents.  I guess everyone was screaming at the television screen for Sookie to finish the devilish fiend. He revealed that he was protecting Sookie from being killed by her parents.  When she struck Warlow with her faerie power there was a connection to Bill (Stephen Moyer); Bill has the ability to control Warlow!

Jessica (Deborah Ann Woll) wallowed to Bill about her mistake about attacking Andy’s (Chris Bauer) faerie daughters, which prompted Andy to go into protective mode as he stormed into Bill’s residence and found his daughters sucked dry of their blood.  Jessica attempted to make her escape, as Andy guarded himself.  Pam (Kristin Bauer van Staten) found herself inside the vampire camp where experiments were in the midst of taking place.

Sarah did her best to convince Governor Truman about having a child with her; she must have lost her mind, if she thinks that, she may as well transform herself into a vampire.  Bill did his best to convince Warlow that he is Lilith’s prodigy and he is doing her work. A flashback scene showed Lillith and Warlow love making, just before she transformed him into a vampire.

Jason ran into Sarah Newlin; they both appeared smitten by each other; it’s been awhile since these two have seen one another and slept together. Alcide (Joe Manganiello) dealt with his daddy issues involving his father portrayed by Robert Patrick.  Eric (Alexander Skarsgard) and Tara (Rutina Wesley) also found themselves captive at the vampire camp. Jessica showed up at Jason’s doorstep crying her tears out as she revealed that she attacked Andy’s daughters; and had an epiphany that she could have been doing the devil’s work.  The ladies exchanged harsh words, which resulted in Sarah having Jessica removed from the premises as she was also taken to the vampire camp.

Things do not look too bright for the vampire race; someone new is joining the camp each and every day.  It appears the experiments are testing the vampire’s skills: agility, emotions and intellect. Sookie ran into Lafayette (Nelsan Ellis) at Merlotte’s and asked for his help to help her remember her past. Holly comforted Andy after learning that his daughters were dead; he’s out for blood and I have a feeling that Jessica will see the true death this season.  It was indeed an emotional moment, where Holly poured her heart out to Andy to protect him from doing something stupid.

A frightened Jessica reunited with Tara; I’ve never seen Jessica this emotional and paranoid. Pam’s therapy session was a bit of an eye-opener, but it was more of a game for Pam to play with the human’s psyche, little did she know she was being used. Nicole (Jurnee Smollett) attempted to call her parents, but not before Alcide’s father spotted her and Sam arguing.  Couldn’t believe the governor placed his own daughter in the vampire camp; that’s quite low to say the least.  Where’s the love?

Lafayette performed the spell to communicate with Sookie’s parents. Her parents were quite rambunctious to say the least, as Sookie asked if they attempted to kill her.  Warlow wanted to transform Sookie into a vampire and promised to protect her forever.  Her parents decided to protect their daughter by killing her; Lafayette found himself possessed by Sookie’s father who held her captive by placing her body into the trunk of a car.

Bill attempted to reason with Warlow who was ready to kill the doctor. It was revealed that Warlow killed Lillith.  Governor Truman was pleased to see Mr. Northam in captivity. It was a twisted plan that involved Pam and Eric being forced to fight one another.  Please do not let this happen, could Pam or Eric be bidding farewell this season?

Lafayette attempted to drown Sookie in a pool of water, as the episode concluded.  With only five episodes left this season it’s only a matter of time before blood begins to spill.  Audiences will be shedding tears very soon.  Until next Sunday “True Blood” lovers.

“The Chi” Is Riveting Television

Wedding Mania On “Days Of Our Lives!”