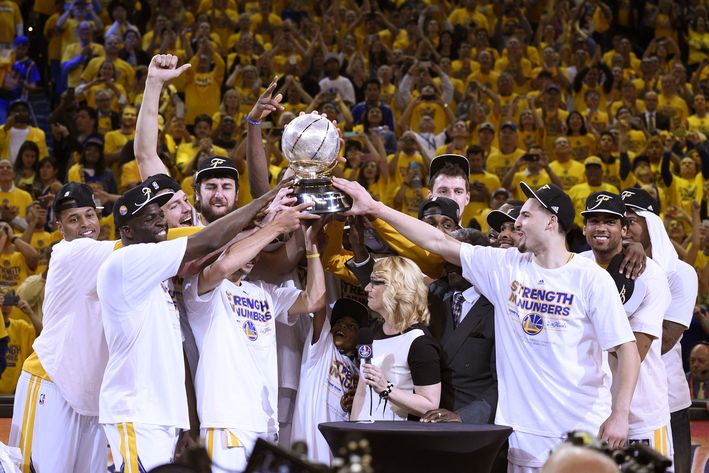 OAKLAND—The Golden State Warriors are back in the NBA Finals for the first time in 40 years.

Stephen Curry had 26 points, eight rebounds, six assists, and five steals and Harrison Barnes added 24 points in a 104-90 victory over the Houston Rockets on Wednesday, May 27 at Oracle Arena.

Warriors fans watched their team hoist the Western Conference championship trophy underneath gold streamers and confetti, celebrating a moment this franchise has been waiting for since they won their last NBA title in 1975. The win brings to an end the longest drought between Finals appearances in NBA history.

The Warriors shook off another slow start and pulled away for good in the final quarter, thanks to some gritty defense and exceptional play from the teams’ bench. Festus Ezeli, Andre Iguodala and Barnes combined to score the first 21 points of the fourth frame, including nine straight from Barnes in just over two minutes to give the Warriors a 87-72 lead with 7:10 left to play.

All five Rockets starters scored at least 10 points, but MVP runner-up James Harden had a forgettable finale. Harden had a playoff record 13 turnovers and scored 14 points on 2-of-11 shooting. Dwight Howard led Houston with 18 points and 16 rebounds.

“Two years ago we were sitting on this floor after a second round loss to San Antonio thanking them for their support. Fast forward two years later and we’re four wins away from the gold. This is pretty special.”

The Warriors advance to play the Cleveland Cavaliers, who won their conference title after sweeping the Atlanta Hawks in four games. Leading the way for the Cavs is LeBron James, who is making his fifth straight appearance in the Finals after four straight trips with the Miami Heat. The four-time MVP is hoping to bring a championship to his hometown for the first time in franchise history.

The Warriors have home court advantage and will host Game 1 of the best-of-seven series starting Thursday, June 4 at 9:00 p.m. EST in Oakland.