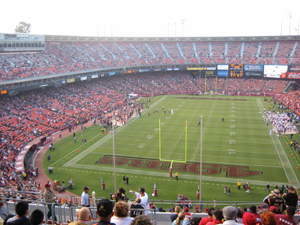 SAN FRANCISCO —On Monday, October 15, the names of two men arrested for the stabbing of a man outside Candlestick Park was released to the public.
Multiple reports indicate Kristopher Viana, 22, and Alexandro Arguelles, 30, were involved in an attack during a San Francisco 49ers game at around 1:30pm.
Police say the two men from San Francisco got in an argument with a 27-year-old man who was wearing a Dallas Cowboys jersey when it turned physical and was broken up by bystanders.
Viana and Arguelles are said to have come back moments later with Viana attempting to stab the victim’s girlfriend and another man before stabbing the victim with a knife.   Arguelles allegedly punched someone before the pair fled the scene.   The two men were caught a short time later on Blanken Avenue.
The two men were taken to jail and booked on three counts of assault with a deadly weapon and conspiracy. Viana was also booked on a weapons charge for the use of the knife in the attack.
While the victim’s injuries from the stabbing were initially thought to be life-threatening, the man is expected to survive.
At the time of the attack, the 49ers were playing the New York Giants.   They fell 26-3 to the Giants, to drop to 4-2 on the season.