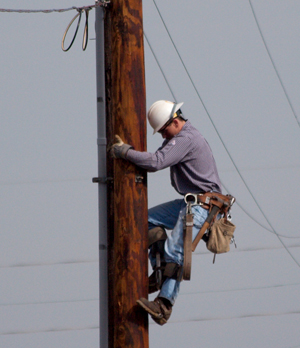 SAN FRANCISCO—On Monday, October 15, the San Francisco Police Department issued a warning urging the public to be wary of a scam in which suspects falsely pose as utility workers to gain entrance to homes.   Upon gaining entry, the suspects distract the occupants and burglarize the residence.

The SFPD opted to issue a warning to residents after an incident occurred in the 1400 block of Jackson Street on Wednesday, October 10.   Around 9:15a.m., a man claiming to be a water department employee asked to check water faucets in the residence.   The 82-year-old male victim admitted the suspect inside his home and left him alone in a bathroom for several minutes.   The victim reported he later saw the suspect leaving a back bedroom.   Once he encountered the resident, the suspect appeared nervous and spoke into a walkie-talkie radio.   After accompanying the victim to the garage and talking with him for several minutes, the suspect left.

The victim proceeded to call the water department and was told that there were no issues with water service in his neighborhood.   He later reported that money and other property had been stolen from his home.

A similar incident occurred later that morning in the 100 block of Southwood Drive.   At around 11:30a.m., the suspect told the 52-year-old female resident that a nearby water main was broken and he needed to test the water for possible contamination.   After entering inside her home, the suspect went to several areas in the home including the kitchen, bedroom and bathroom.   The victim reported that the man spoke into a walkie-talkie radio in an unidentified language before leaving.   No theft was reported in this case.

The SFPD have issued safety tips for residents to help prevent such incidents from happening to them.   Do not open your door to strangers even if they claim to be utility workers.   Always ask for identification before admitting a worker into your house as all utility companies issue identification cards to their employees.   If you have any doubts about the legitimacy of a person claiming to be a utility worker, call the utility’s customer service department.

To report any suspicious activity or people in the neighborhood call the non-emergency dispatch line at (415) 553-0123.  Call 911 to report an emergency or a crime in progress.

Anyone with information on these crimes is asked to contact the SFPD Special Victims Unit/Financial Crimes Section at (415) 553-1521. Tips can also be sent to Text a Tip at TIP411 by beginning the text message with SFPD.