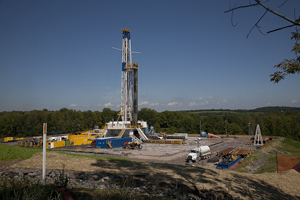 SAN FRANCISCO —On Tuesday, October 16, environmental groups filed a lawsuit against the state of California in an effort to stop hydraulic fracturing.

The lawsuit from non-profit environmental law firm Earthjustice filed on behalf of the Center for Biological Diversity, Earthworks, Environmental Working Group and the Sierra Club comes as regulators are in the process of creating new rules for the oil and gas extraction practice.

According to the lawsuit which was filed in Alameda County Superior Court, regulator California Department of Conservation, Division of Oil, Gas and Geothermal Resources is accused by the groups of failing to evaluate the risks of fracking, even though it was used for more than 600 wells in the state last year.
Fracking is defined as pumping chemical-laced water and sand into a well to open cracks that release oil and gas.   The practice has generated a lot of controversy across the United States, leading to bans in one state and several cities.   The industry insists the practice is safe as along as wells are adequately built.
Fracking is said to have taken place in California oil wells since the 1950s, but the plaintiffs want the regulator to ban fracking until it has prepared “programmatic” environmental impact reports to cover the practice in various types of wells around the state.
Earthjustice attorney George Torgun commented in a statement on the lawsuit.
“Public outcry has finally forced the Department to take a look at fracking. They’ve held workshops and say they’re considering regulations. But the problem needs attention now before too much damage is done,” Torgun said.
In July 2012, the Department of Conservation hosted several workshops to discuss potential regulation in anticipation of increased horizontal drilling in the state.   In addition to fracking, the practices have unlocked oil and gas reservoirs in the United States.

The new regulations are not expected to be finalized until the middle of 2013, though a rough draft of rules is expected soon.   The state of California has so far been unable to create legislation to halt fracking.