SEATTLE,WA—Protests have taken place almost each night in Seattle, Washington since May 25, after the death of George Floyd, at the hand of Minneapolis Police Officer Derek Chauvin. As a direct result, the city of Seattle has reported rising violence and crime rates.

On Sunday, July 19, two people were arrested after a protest erupted, which injured some police officers. The Seattle Police Department publicly announced that demonstrators threw rocks and bottles, and one officer was transported to a hospital for treatment of injuries. The East Precinct police station was also damaged, and a small fire was ignited in front of it, authorities noted.

Protesters marched outside of the East Precinct police station, and chanted “No Justice, No Peace,” while calling for defunding of the Seattle Police Department. Nearly a dozen more Seattle police officers were injured during separate protests that occurred on July 19. A body-cam video publicly released by the Seattle Police Department on Twitter shows protestors deliberately throwing water bottles and fireworks at police officers standing outside of the East Precinct police station.

“In response to community concerns, we are releasing body-worn video around the Sunday protests where 12 officers were injured. We are releasing this video in an attempt to be transparent and will continue to release videos of significant incidents,” the Seattle Police Department wrote in a tweet on July 20, following the release of this video.

According to the Seattle Police Department, the protestors gratified the police headquarters and broke several windows at the Municipal Court Building. They continued up 3rd Avenue, and damaged more businesses along the way.

“Individuals in the group appeared to target Starbucks and Amazon,” stated a public statement from the Seattle Police Department. According to authorities, an officer was severely injured and taken to the hospital after he suffered “laceration and abrasion injuries” from fireworks. The statement from the Seattle Police Department said that officers used blast balls and pepper spray against the protestors, but no tear gas or other weapons were used. 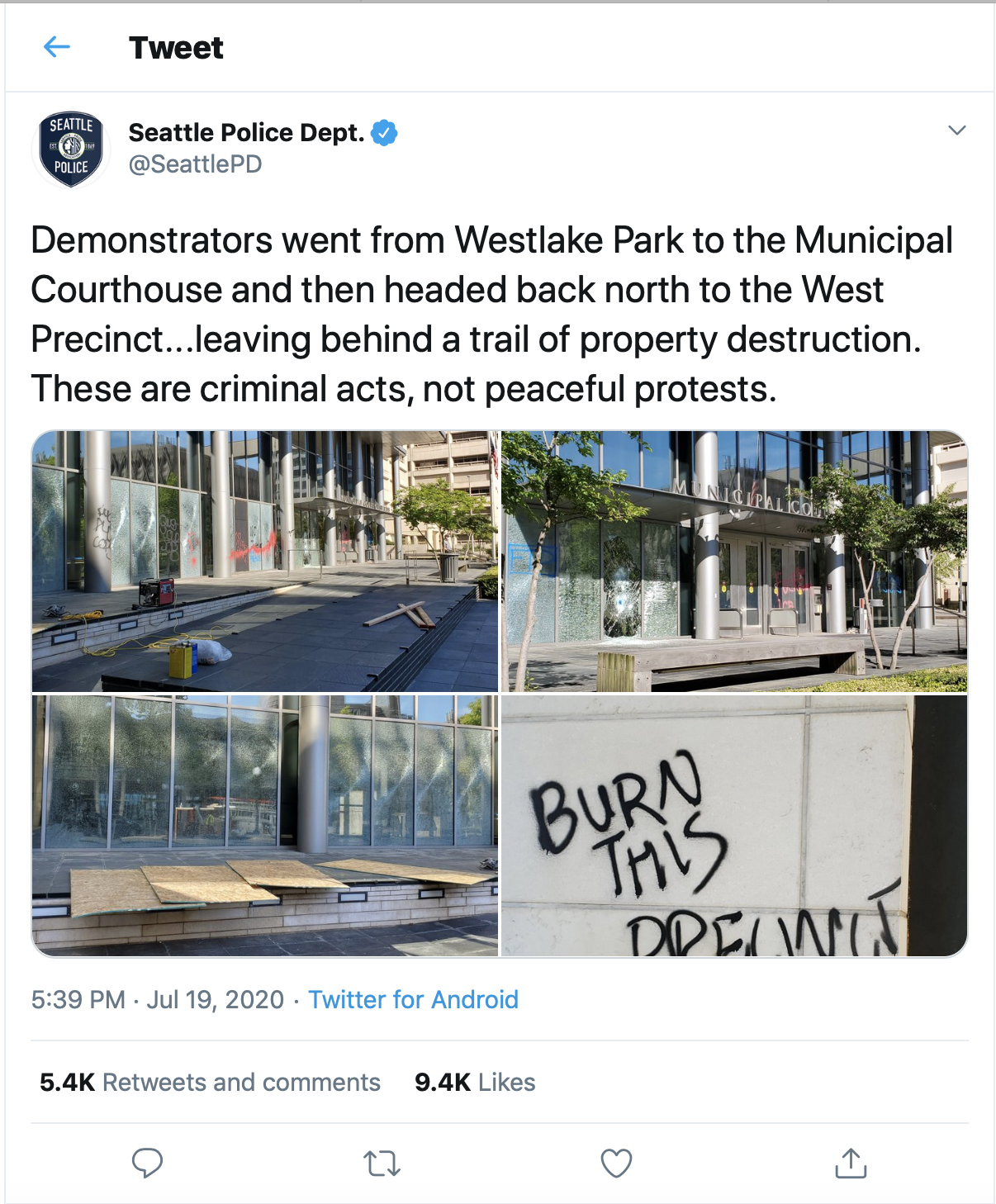 “As our neighborhood businesses struggle to recover, it’s frustrating to see such widespread and recurring damage to our center city. With our communities trying to rebuild, we need our leaders to ensure our city is safe for everybody. Unfortunately, Sunday’s acts of property destruction and vandalism only serve to undermine the ability of small businesses and our downtown to recover,” the Downtown Seattle Association wrote in a public statement to address the violence.