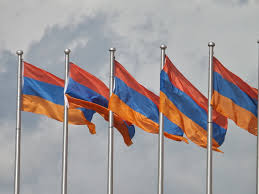 SAN FRANCISCO—Profane graffiti was discovered on the walls of Krouzian-Zekarian-Vasbouragan Armenian School and Community Center on Thursday, July 23. The tagging consisted of curse words and an Azerbaijani bent.

Authorities are investigating the incident. Grace Andonian, the school’s principal, presented the police with surveillance footage and spray-paint cans left behind at the scene of the crime.

San Francisco’s Armenian community came together Friday, July 24, outside the school to pray and to help clean up the graffiti.

The Armenian National Committee of America (ANCA) released an official statement Friday condemning “in the strongest possible terms the racially-motivated Armenophobic vandalism that took place on July 24 against the Krouzian-Zekarian-Vasbouragan bilingual Armenian School in San Francisco.”

San Francisco District Attorney Chesa Bodin tweeted Friday, “I’m outraged. This is totally inconsistent with San Francisco values. It is also a CRIME. We are working with San Francisco Police Department to investigate. We stand with our Armenian brothers and sisters.” He also promised his office would be involved in this investigation.

California State Senator Anthony Portantinostated, “Our children’s schools should not be subjected to racist and hateful graffiti […] Those responsible must be identified and face legal consequences. According to newspaper accounts the graffiti appears to be Azerbaijani-centric. I call on Azerbaijan to stop the unprovoked violence on the Armenian border and end this assault on American institutions where we send our children.”

The school posted the following message on its website:

“KZV Armenian School is the only Armenian School in Northern California. It has served generations of Armenian youth, teaching them their ethnic language and history alongside the standard educational framework. The school is a backbone of the Armenian community connecting Armenian-Americans across the greater Bay Area.

The school was vandalized the night of July 23rd 2020 by Turkish and Azeri nationalists. Obscene and threatening political slogans, profanities and hate speech were graffiti’d on children’s classrooms. Needless to say, the cowardly targeting of children on nationalistic grounds is both unacceptable and terrifying.

We will not allow terrorists and thugs to erode that in any way. Thank you for your consideration of support.

This GoFundMe is organized by the school board of KZV, with members based across San Francisco. Please see KZV Board for more information. The board assists the administration in managing and caring for the school, its teachers, students, and parent community. The funds will be disbursed directly to the school to be used for graffiti cleanup, repair of damage to walls, floors, doors and gates, re-painting, and enhancement of the current fencing, security gates, and automated parking lot gates.”

The Armenia-Azerbaijan border saw its most violent day since the four-day war in April 2016 with the loss of 16 lives on July 22. Armenian protesters in Los Angeles were presented with hate symbols and were physically assaulted by Azerbaijani counter-protesters.