SAN FRANCISCO—Between the hours of 7 p.m. and 3 a.m. on Friday, August 21, a DUI checkpoint will be held somewhere within the city limits of San Francisco, according to the San Francisco Police Department.

San Francisco police officers will be stopping vehicles in search of drivers who are under suspicion of getting behind the wheel while under the influence of alcohol or drugs. The sobriety check will cause a slight delay in the city’s traffic pattern, but those suspected of any signs of impairment will be further evaluated by trained officers who are able to identify the signs of drug-related driving. 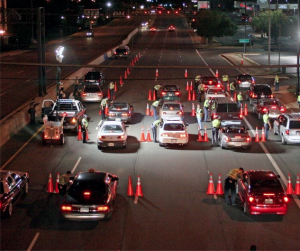 According to a press release from the  Officer Albie Esparza of the SFPD, “In California, this deadly crime led to 867 deaths in 2013 because someone failed to designate a sober driver. Nationally, the latest data shows nearly 10,000 were killed by an impaired driver. In 2013, San Francisco had one traffic fatality related to a DUI driver. There were 56 felony DUI arrests during the same time period.”

Drivers caught driving under the influence will be subjected to jail time, fines, fees, DUI classes and other expenses that can exceed $10,000.

DUI checkpoints can also save $6 for every $1 spent, as well as receives approval from 90 percent of California’s residents.