The Mayor of San Francisco was joined by San Francisco Board of Supervisor Rafael Mandelman, the Recreation and Park Department, Public Works, and kids from Noe Valley Nursery School and Eureka Valley Arts to cut the ribbon on the $5.2 million renovation of the site, located in Diamond Heights above the northeastern rim of Glen Canyon. 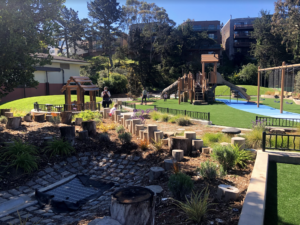 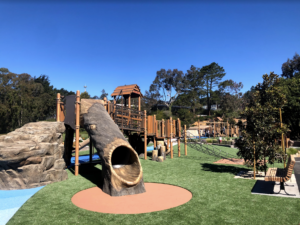 The 6.8-acre park now has improvements to its pathways, landscaping, lighting, drainage, and irrigation systems. The renovations began in 2019, with an improved design focused on safety and connection of the park’s elements. A small amphitheater has been transformed into an accessible plaza with views of the playground. Fencing has been expanded around the east side of the clubhouse, which houses Noe Valley Nursery School.

The clubhouse restrooms have been reconfigured to a new single user accessible restroom, a gender-neutral, multi-user restroom has been made more accessible, and a ramp has been installed from the playground to the outside restroom.

The nature-inspire park Landscape includes natural elements such as logs, tree stumps, and stones to encourage imaginative play. Architect Jasmine Kaw designed this in a way to promote imagination within nature.