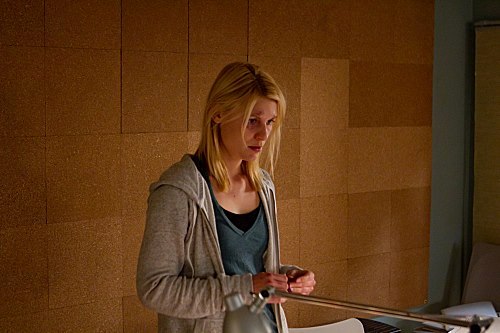 HOLLYWOOD—Well who would have guessed that “Homeland” would reign supreme on Emmy night with a total of 4 awards including Outstanding Drama Series besting “Breaking Bad” and “Mad Men.”   I didn’t expect it, but now that I reflect back on it the series deserved all the Emmy love that it received.    “Modern Family” was victorious as expected for Outstanding Comedy Series; as I stated last week is there anything funnier on television?

Comedian Jimmy Kimmel hosted the soiree and received tons of laughs from the audience as he poked fun at an array of topics including the upcoming election and Republicans in Hollywood.   He opened the show with a skit that involved actresses Connie Britton, Kathy Bates, Zooey Deschanel, Christina Hendricks, Martha Plimpton and Mindy Kaling. It was absolutely hilarious to see Jimmy poke fun at the use of Botox in Hollywood.

Surprisingly the show kept a steady pace at handing out the awards for the night.   Eric Stonestreet was victorious in the Supporting Actor category in a Comedy Series for his work on “Modern Family.”   While writing genius Louis C.K. took home the award for Writing in a Comedy Series for “Louie.”   The love for “Modern Family” continued as Julie Bowen picked up her second Emmy Award for Supporting Actress.    She was sure to give multiple thanks to her cast and crew while on stage.

In perhaps one of the big surprises of the night, Jon Cryer took home the trophy for Lead Actor in a Comedy Series for his work on “Two and a Half Men.” Many were suspecting Louis C.K. to take home the prize; even Cryer was stunned while giving his speech on stage.    Julia Louis-Dreyfus added another Emmy to her collection with her win for Lead Actress in a Comedy Series for her work on “Veep.”   I was really pulling for a win for Amy Poehler or Zooey Deschanel, but there’s always next year.

Both Claire Danes and Damian Lewis took home awards in the Lead Actor and Lead Actress categories in a Drama for their phenomenal work on the Showtime hit “Homeland.”   Danes gave a hilarious shot out to her baby daddy and husband while accepting her award.   The series also picked up an award for Outstanding Writing.   Trust me people, this is a show you need and should be watching; it’s fantastic.

Jessica Lange as expected took home the Emmy for Supporting Actress in a Miniseries or TV Movie for her work on “American Horror Story.”   She was absolutely riveting on the series, can’t wait to see what she does next for season 2.   Julianne Moore won for Lead Actress for her dead-on and awe-aspiring performance as vice presidential candidate Sarah Palin in “Game Change.”   The HBO movie also won the award for Outstanding Miniseries or TV Movie.

With the Primetime Emmys now behind us, it’s just mere months before we gear up for the Golden Globes, Screen Actors Guild Awards, the Grammys and ultimately the Academy Awards.

SFPD Search For Vehicle In Hit-And-Run