SAN FRANCISCO—San Francisco’s only Olive Garden located on 3251 20th Avenue, closed after its last day on December 5, as reported first by Hoodline. The Italian-inspired restaurant opened its Stonestown Galleria location in the early 2000s, though its official day of opening was never confirmed.

The front double doors of the San Francisco Stonestown Galleria location had signs  on the glass confirming its  closure. The signs read “PERMANENT CLOSURE,” “Beginning December 5, 2020, this location is permanently closed,” and “We apologize for any inconvenience.”

“Closing this restaurant is a difficult business decision, and I can promise you it’s one we made very carefully and thoughtfully, particularly because it impacts our team members and our guests,” Olive Garden spokesperson Meagan Bernstein told Hoodline.

The site’s staff were offered the opportunity to transfer to other Olive Garden locations. The sign also indicated for visitors of those other locations in Northern California, 43 miles and 27.5 miles away from San Francisco respectively, in Fremont (3915 Farewell Drive) and Hayward (24688 Hesperian Boulevard).

Employees were offered to transfer to other casual dining restaurants under the Darden family of restaurants, headquartered also in Orlando, employing more than 175,000 team members in more than 1,800 restaurants.

“My heart sank and felt so disheartened when I heard about the closure,” said Bernie C. in a review written and published on December 14, nine days after the establishment’s final day of service.

“Thank you for all the wonderful memories [at] Olive Garden at Stonestown. For over 20+ years of my life, you have been there. The high school gatherings and dinners, the college meals, and professional meetings. You were a constant and I thank you to all those that were part of this franchise.”

Concerned over restaurant closures during the economic fallout during COVID, San Francisco Mayor London Breed said, “We need the RESTAURANTS Act to help them during this unprecedented circumstance.” 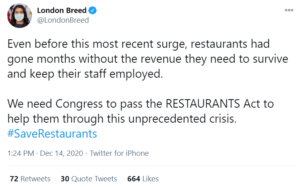 According to the Washington Post, the Restaurants Act would provide $120 billion to help restaurants and bars with fewer than 20 locations. The website advocated for this emergency relief legislation.

“Restaurants are community cornerstones,” the narrator for the introductory video on the website. “COVID closures have tested our strength. Over 8 million jobs have been lost, and in early July, nearly 100,000 restaurants have shut down because of new state closures.” The restaurant industry is expected to lose $240 billion this year.

“Even before this most recent surge, restaurants had gone months without the revenue they need to survive and keep their staff employed,” the Mayor of San Francisco stated.

Some Twitter users criticized Breed by telling her to allow restaurants to resume services, for under the current curfew orders, both indoor and outdoor dining are banned and only takeout is allowed. According to the Bureau of Labor Statistics, the United States food services and drinking places industry declined by 17.4 percent during the month of November.

Estavan Cortez, a server at the wood-fired oven pizzeria, Il Casaro Pizzeria, based in the North Beach neighborhood, said that the curfew orders that banned both indoor and outdoor business make no sense. “It doesn’t make any sense. We can do a lot of things. For example, we are free to go outside. Parks are full of people. Beaches are full of people. Anywhere you go there are a bunch of people. To force essential businesses to close when they are doing things outside makes no sense.”

Cupertino resident Jun Zhao, an operations program manager engineer at Amazon who designs products such as tablets, said, “In my opinion, outdoor dining should be fine as long as it’s controlled properly. It’s easy for things to go out of control, which proper social distancing rules aren’t followed and people risk themselves. It will be convenient for both businesses and customers, but that’s the necessary measure to keep everyone safe.”

One commenter, Cherylynn N on Yelp spoke about the closure of the Stonestown Galleria Olive Garden stating: “RIP OLIVE GARDEN.” The comment was followed by a description memories, for the restaurant with a place in her heart:

“I just heard the news today. Though I didn’t care for your food as I grew older, you will always hold fond memories in my heart. You’re my dad’s favorite restaurant and his restaurant of choice when we met up for lunch.”

She added, “I will never forget the time, I got dumped there when I was 21…Can a girl finish her unlimited basket of breadsticks and glorified TV dinner before you stomp on her heart…in public?”