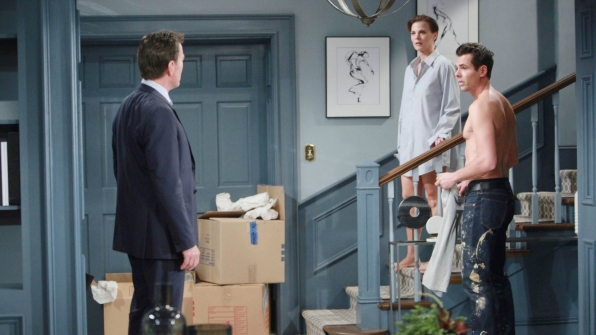 HOLLYWOOD—Well, well things are definitely shifting quite a bit in Genoa City on the CBS soap “The Young and the Restless.” While so many suspected the conviction and sentence of Victor Newman would deliver some much needed peace, it has only reignited many more feuds and chaos from some of our favorite characters. In the past week, several relationships have been greatly tested, none other than that of Phyllis and Jack Abbott. Yes, ‘red’ and her powerful hubby are dealing with one of the toughest patches in their marriage.

Not only did Victoria give hint to Jack that something more is going on with his wife and his brother Billy, he actually caught the duo half-naked at Billy’s abode. Yeah, to say the sequence was awkward would be an understatement to say the least. Jack was livid, Billy shrugged his shoulders and Phyllis looked like she had seen a ghost. For weeks, the writers have been inching towards a hook-up between Billy and Phyllis, and all signs point to it happening a lot sooner than later.

Billy and Jack have been at odds for years, and it looks like if Billy hooks up with Phyllis, that brotherly love they have will be out the window. Who would have suspected that PassKey would be the downfall of so many relationships and hook-ups? Speaking of Jack, he looks to be getting reacquainted with his old flame Nikki who has fallen off the wagon yet again. Jeez, this woman just needs to go to rehab already; she’s fallen off more times than I can count. And with Victor shutting his wife out of his life for her betrayal it looks like old flames will ignite yet again.

Another relationship that looks to be on the outs is between Mariah and Kevin. While the chemistry was there, it’s quite evident he has eyes for Natalie who suits his demeanor much more. I mean they’re both cyber hackers; if that isn’t a match made in Heaven I don’t know what is. This is only causing Mariah to bleed jealously as it looks like her old scheming ways could come back into the mix. We’ve seen Natalie and Kevin dance around a possible hook-up for weeks, but my gut is telling me things will happen very soon between those two.

Another relationship that seems to be heating up is that between Luca Santori and Summer! It’s always hard to fathom that these two would become an item, but the chemistry between the actors is quite palatable to say the least. Luca has been Summer’s right-hand man (literally) for weeks, and she has been by his side, while every single person in Genoa City has kicked him to the curb.

Since Noah and Marisa have gotten their happily ever-after, so it appears, Luca is free to hook-up with whomever, and has set his sights on a younger, more impressionable and gullible Summer, who has taken their relationship to the next level. Too bad for Kyle, who has no idea his girlfriend and Luca are getting hot and heavy. I’m certain Nick, Phyllis, Jack and Adam will have plenty to say to warn Summer about her new bed buddy.

Hey, “Young and Restless” lovers we can’t forget about Devon and Hilary who are dealing with a rough patch because of her need to succeed at any cost. I mean to blackmail a woman who was on her deathbed, that is quite low, which has shown that Hilary is back to making enemies yet again. Neil isn’t too happy with her actions, and of course Lily has lit a fire underneath her nemesis yet again.

Wrapping up things in the relationship world, is the sparks between Ashley and Neville. While I honestly don’t see these two as an item, it looks like the writers might be heading in that direction. However, fans of the soap are well aware that Ashley and Stitch have chemistry that while dormant at the moment, is certain to reignite, especially with Stitch’s troublemaker son. It’s just a matter of time before Abby loses it on Max causing a major rift in her relationship with her husband.

With so many relationships crumbling and building, the biggest one to watch is between Phyllis and Billy. I’m certain their hook-up is certain to rock the lives of many people in Genoa City, not to mention it could result in something chaotic happening during May sweeps! “The Young and the Restless” airs weekdays on CBS.

Liam Spencer Is The Daddy On “Bold And Beautiful!”

Liam Spencer Is The Daddy On “Bold And Beautiful!”