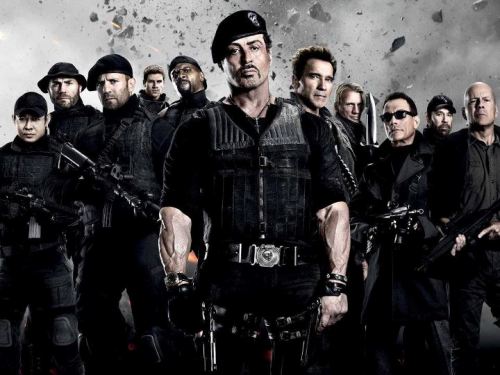 HOLLYWOOD—When “The Expendables” arrived in theaters back in 2010, the first thing that came to my mind was the movie “Ocean’s Eleven;” a movie which a list of high caliber stars, but little to no plot to guide them.   Was I ever surprised at how much I enjoyed “The Expendables” which contained nearly every action star in the world?   Fast-forward two years later and we have the sequel to that box-office hit “The Expendables 2.”

The cast includes powerhouses like Sylvester Stallone, Arnold Schwarzenegger, Bruce Willis, Jet Li, Dolph Lundgren, Chuck Norris, Jason Statham, Terry Crews, Jean-Claude Van Damme, Randy Couture and introduces Liam Hemsworth to the mix as well.   The movie opens with the gang saving a Chinese businessman, and Ross coming face-to-face with a rival and ally of his at times, Trench portrayed by Arnold himself.

What makes this movie such a treat is that it’s a movie so overdosed with adrenaline, it’s hard to convey in terms why anyone would take it serious, but it’s an amazing escape from the real world.   Of course the plot is a bit silly at times, the action is over-exaggerated, but it’s a fun ride.   The dialogue between these tough as nail guys is what keeps the pacing of the movie steady; they take so many jabs at one another.   Everyone has huge egos and wants to be praised for their efforts, but at the end of the day they’re like one big happy family.

So it only makes sense when one of their own, Billy the Kid (Hemsworth) is captured by Jean Vilain (Jean-Claude Van Damme) who is on a mission to locate massive amounts of plutonium and sell it to the highest bidder, the expendables would get involved.   It’s an all out epic battle between the forces of good and evil, of course we know who triumphs in the end, but is an explosive ride to get to that point.   Audiences should expect loads of gunfire, countless hand-to-hand combat, explosions galore and loads of corny dialogue at times.

If it’s a picture full of testosterone that audiences is after “The Expendables 2” is a must-see.   Without a doubt men will love the movie, for women if they enjoy action movies they’ll enjoy the picture as well.   My brain is just running with ideas for what they can do and who can join the gang for “The Expendables 3” because let’s face it we all know it’s happening in the near future.