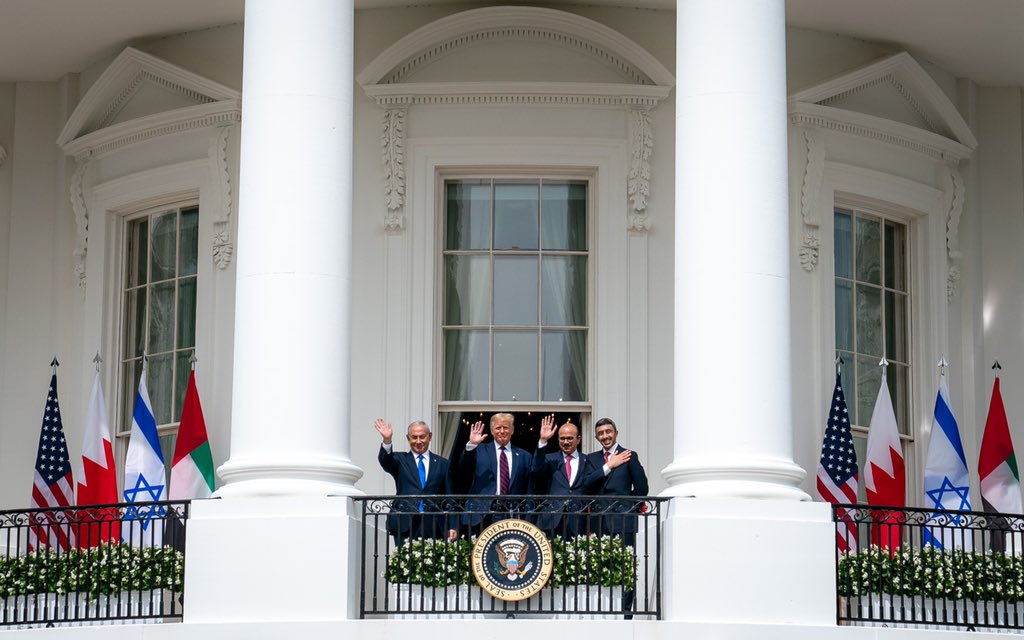 WASHINGTON D.C.—Representatives from Israel, the United Arab Emirates and Bahrain, signed the Abraham Accords, a diplomatic agreement that establishes peace between those countries, during a ceremony that was presided by President Donald Trump in The White House on Tuesday, September 15.

The agreement, brokered by the Trump administration, normalizes relations among those countries and commits them to cooperate with each other in fields such as education, healthcare, trade and security. It also allows them to deepen their economic ties, exchange embassies and ambassadors and begin direct flights. President Trump said that the most important thing that Israel will gain from the accords is peace.

Before signing the documents, the President and each representative spoke in the ceremony held in The White House. Israel Prime Minister Benjamin Netanyahu said this day was a “pivot in history.”

“The blessings of the peace we make today will be enormous,” Netanyahu said. “First, because this peace will eventually expand to include other Arab states and, ultimately, it can end the Arab-Israeli conflict once and for all.”

“This new vision —which is beginning to take shape as we meet today— of the future of the region full of youthful energy, is not a slogan that we erase for political gain. Everyone looks forward to creating a more stable, prosperous and secure future,” he said.

In his speech, Bahraini Foreign Minister Abdullatif bin Rashid Al Zayani said they welcomed and were grateful for the steps taken by the Israeli government to sign this agreement. He mentioned that the conflict in the Middle East has set back the region, “causing untold destruction and thwarting the potential of generations of our best and brightest young people.”

“Ladies and gentlemen, today’s agreement is an important first step and it is now incumbent on us to work urgently and actively to bring about the lasting peace and security our people deserve,” the Bahraini representative said. “A just, comprehensive, and enduring solution to the Palestinian-Israeli conflict, will be the foundation, the bedrock, of such peace. We have shown today that such a path is possible.”

After each leader spoke, they signed three copies of the Abraham Accords Declaration, one in English, one in Hebrew and one in Arabic.

During a press conference before the ceremony, President Trump said that about five more countries would join the peace agreements with Israel. He said the government is already talking to them and that he could not reveal the name of those nations for now.

Prime Minister Netanyahu alluded to this and said that Israel has a strong relationship throughout the middle East.

“You know, Israel doesn’t feel isolated at all. It’s enjoying the greatest diplomatic triumph of its history,” he added.