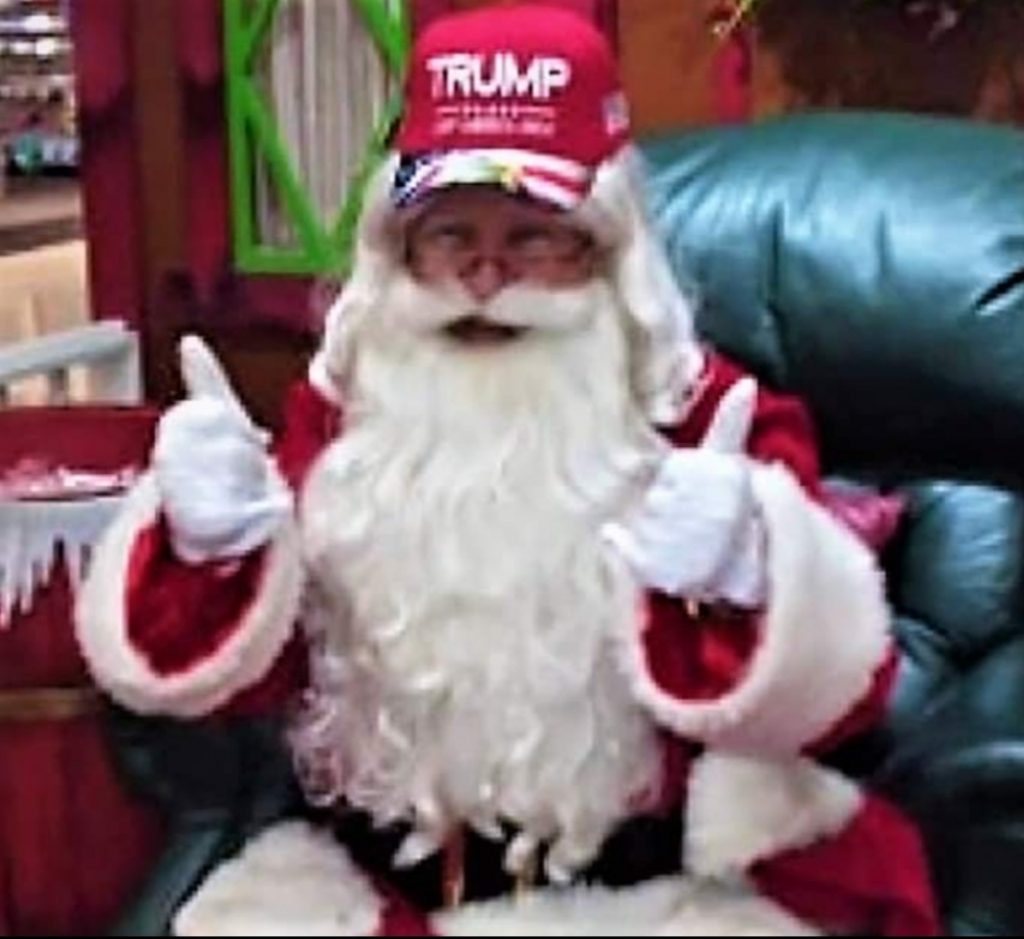 UNITED STATES—A veteran Santa sporting a Trump hat, was relieved of his duties at the end of his shift. Frank Skinner released the following statement on December 10:

“For fun, I took the picture for personal use, with my personal phone. Later, for laughs, I posted it on my personal Facebook page. I certainly was not trying to create a firestorm by doing that, but simply intended to post the photo on my page for a little humor, as I have many friends & family who like me support our President. I knew they would enjoy the photo and get a laugh.”

A screenshot of his post was sent to management at the Mall at Waycross who asked that Skinner remove his hat. Skinner said that part was, “taken out of context as if I wear it all day.”

“The misinformation caused quite a backlash,” said Skinner. “It was painful and overwhelming to watch all the comments and the untrue stories spread.” He stated no child or parent requested he take this picture, after false reports surfaced.

Skinner who says he has played Santa for nearly five decades went to management who indicated that he would just be “taken out of the rotation for a few days to investigate.” He later discovered that he had been replaced.

Skinner apologized in a letter to RCG Ventures, Waycross mall manager, Jimmy White, and the public. A friend of his set up a GoFundMe page to support Skinner.

“This was never about the money,” said Skinner and offered to return donations upon request.

He added, “With all the heartache something else came out of this as well. I do want to thank those who came to my defense. The outpouring of love I felt was incredibly overwhelming. I am eternally grateful for your unconditional support. I did not take any comfort in all this confusion but I certainly found comfort in the support sent my way. This meant more to me then you will ever know!”

“I am willing to accept my responsibility and let the cards fall where they may. I also want to make it clear I love all children !! I do my utmost best when they come to see me that they feel special. Again, people who really know me can testify to what I have shared. in closing lets, all remember this is the Christmas Season let’s put aside our differences and LET’S CELEBRATE IN KEEPING CHRIST IN CHRISTMAS !!!!,” said Skinner in a statement.

Canyon News reached out to the Mall at Waycross for comment, but did not hear back before print.