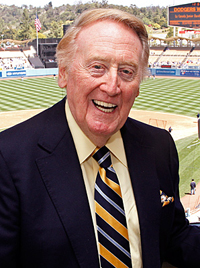 Scully, being a true fan, is excited about the Dodgers’ recent roster additions, and doesn’t want to miss out on any big things to come.

Like in recent years, the 84-year old Scully will only do Dodger games in California and Arizona, except for a trip to Yankee Stadium next June, which Scully wants do.

This is great news for not only Los Angeles Dodgers fans, but baseball fans everywhere. Vin Scully, a Hall of Famer, belongs in the booth.

Top 7 Bets To Make On The Belmont Stakes: A Guide To Winning