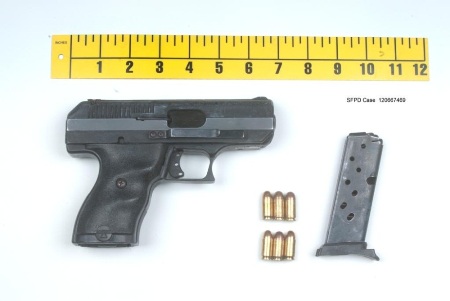 SAN FRANCISCO —Police have arrested three people in connection to an armed robbery that occurred on Wednesday, August 22 at approximately 12:02am on the 2800 block of 22nd Street.   The victims, both males from San Francisco were approached by three men.   Two of the suspects pointed guns at the victims, while the 3rd suspect simulated a gun underneath his shirt.

According to a press release from the SFPD website, the victims handed over their belongings which included their cell phones, a wallet with cash and a digital music player. The suspects fled the scene and the victims called 911.

“A canine office responding to the call spotted two men matching the suspects’ description running on Folsom Street near 20th Street.   He watched one suspect, Xavier Williams, male 24, of Richmond, enter the driver’s door of a blue Hyundai which was parked on the 3300 block of 20th Street.   The officer saw Williams reach towards the bottom of the driver’s seat area.   A second suspect, Mark Mays, male 25, San Francisco, ran to the passenger door.   When the officer ordered the suspects to stop, Mays ran north on Folsom Street.   The officer broadcast May’s description over the police radio and then detained Williams,” states the press release.

Other officers who were in the area responded to the call and located Mays lying down on stairs near a building on the 2300 block of Folsom Street. Authorities later detained Jerome Davis, 40, of San Francisco who matched the description given by the victims.

During there preliminary investigation, police recovered a semi-automatic handgun from the driver’s seat of the Hyundai where Williams was sitting.   They also found a second semi-automatic hand gun underneath a car on the 2300 block of Folsom Street.   Both weapons matched the descriptions given by the victims.   Officers found additional evidence on Folsom Street which included the victim’s discarded property and a jacket worn by one of the suspects.

Davis was booked on outstanding warrants, while Mays and Williams were booked at the Mission Station and face charges that include two counts of robbery, weapons charges, possession of stolen property and conspiracy.