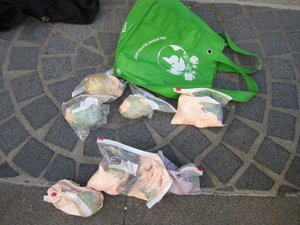 SAN FRANCISCO —Police arrested 22 people on Saturday, October 6 after their group marched in the Financial District without permission and vandalized vehicles and businesses.

The arrests culminated a chain of events that began at 2:50pm when 100 protestors believed to be from the anarchist group Black Bloc gathered at Justin Herman Plaza in downtown San Francisco and began marching west bound on Market Street.   Wearing black clothing and masks on their faces, protestors marched on the streets which disrupted the normal flow of traffic.

A San Francisco Police Department news release indicates officers arrived at the scene and were hit by projectiles that had been thrown at them by the protestors.   One officer was injured by the projectiles and sustained injuries but none were life threatening.   Police warned protestors several times that the march was not authorized and was causing a public safety hazard.

The group failed to heed the warnings and officers surrounded them at California and Battery Streets around 3:30pm.   Protestors proceeded to toss flares and bags of paint at police with some of the bags containing rocks.   Several SFPD officers were covered in paint from the attacks.   Part of the group fled the area and went to Pine and Sansome Streets but the protestors were detained by police.

The 22 suspects were arrested on one or more of the following charges: conspiracy, riot, refusing to obey a lawful order from a peace officer and resisting, delaying and obstructing a peace officer, and assault and battery on a peace officer.
Police report a search of the suspects’ backpacks turned up items such as hammers, an ice pick, flares and other weapons including more bags of paint containing rocks.   Anyone who was a witness or has information about the acts of vandalism on the vehicles and businesses are encouraged to contact the SFPD.