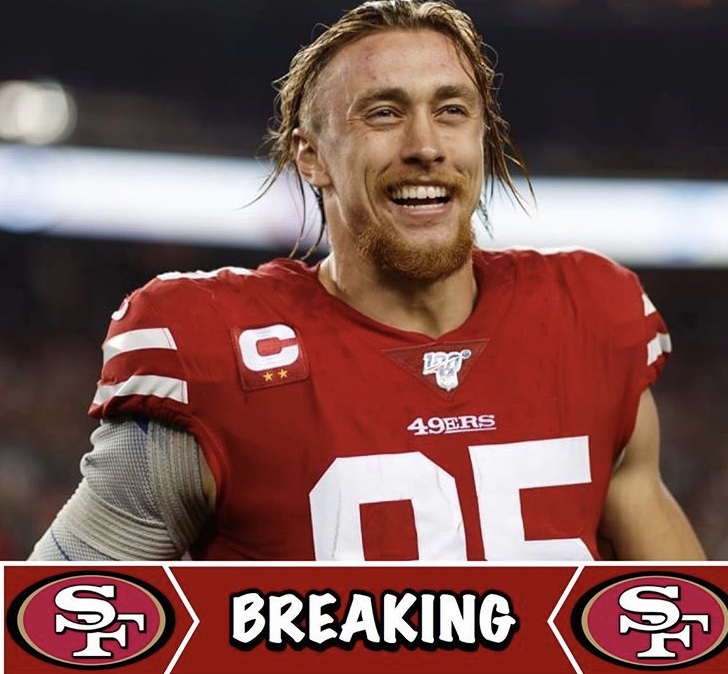 SAN FRANCISCO—On Thursday, August 13, the San Francisco 49ers signed an extension to their tight end George Kittle to a five-year $75 million deal that runs through 2025.

“I want to say thank you for giving me this opportunity. I love being a 49er and am blessed to have the opportunity to wear red and gold for years to come. I can’t wait to continue our quest to bring another Super Bowl back to The Bay”.

Kittle came into the league in 2017 when he was drafted out of University of Iowa in 2017. In his rookie season, he had 43 receptions for 515 receiving yards and two touchdowns. He broke out in 2018 by earning Second-Team All-Pro, voted into the Pro Bowl, set a single-season  record for receiving yards as a tight end with 1,377 yards, and was voted into the top 100 of 2019 in NFL ranking at #29.

In 2019, he continued to dominate by earning First-Team All-Pro, another Pro Bowl, earned the highest grade of any player in the NFL for Pro Football Focus, and was ranked number seven in the top 100 of the 2020 season.

On Wednesday, August 12, there was speculation that Kittle signed a 6-year $94.8 million contract after 49ers Webzone issued the tweet. Kittle responded by tweeting back, “Y’all believe everything you read on the internet huh.”

According to National Insider for the NFL and NFL.com, Ian Rapopport, “The #49ers are giving TE George Kittle an $18M signing bonus”.

Kittle’s last remarks on this contract extension was, “Finally, to the greatest fans in the NFL – THANK YOU! Thank you for all your support in everything we do, for cheering us on no matter what and for always being FAITHFUL. I will continue to work for all of you as we make the 2020 season another success. WOOOOOOOOOOOOOOOOOOOO!”