OAKLAND—NFL star Antonio Brown was granted his release from the Oakland Raiders on Saturday, September 7, in light of fines for conduct detrimental to his team.

The pairing of Brown and Raiders’ Jon Gruden’s arose from the ashes of burnt bridges Brown left in his wake with the Pittsburgh Steelers. On March 9, the Steelers and the Raiders agreed to trade Brown to Oakland in exchange for a 3rd and 5th round picks in the 2019 NFL Draft. After missing practices and infighting with teammate Ben Roethlisberger, the week leading to the final divisional game against Cincinnati, the Steelers decided to go forward with benching the All-Pro receiver. In February, he requested a trade from the Steelers organization.

The news of Brown’s off the field actions led to more scrutiny for him and his new team. He posted an image to Instagram of his feet which had become frostbitten and peeling from a cryotherapy accident he suffered while in Paris seeking treatment. The Raiders were bogged with reports that Brown wouldn’t practice without the helmet he’s worn for nine seasons. In 2018, the NFL informed teams of Brown’s style of helmet no longer meeting standards set by the league. He filed a grievance with league and met with an arbitrator to appeal for his banned helmet, which ended in the arbitrator ruling to deny Brown’s appeal.

On Wednesday, September 4, Brown took to Instagram to send out a message to confirm his long-awaited switch to an approved style helmet for play and posted a picture of fines he received from the team. On Thursday, September 5, during team meetings, Brown and Raiders General Manager Mike Mayock engaged in a heated altercation which resulted in Brown threatening to punch the new GM.

On Friday, September 6, Brown came into the team meeting giving an emotional apology to his teammates for his actions. With the news of new fines reaching $200,000 Brown took to social media to request a release from the organization.

On Saturday, September 7 at 8:56 a.m., the Raiders organization released a statement granting Brown his release from the team. 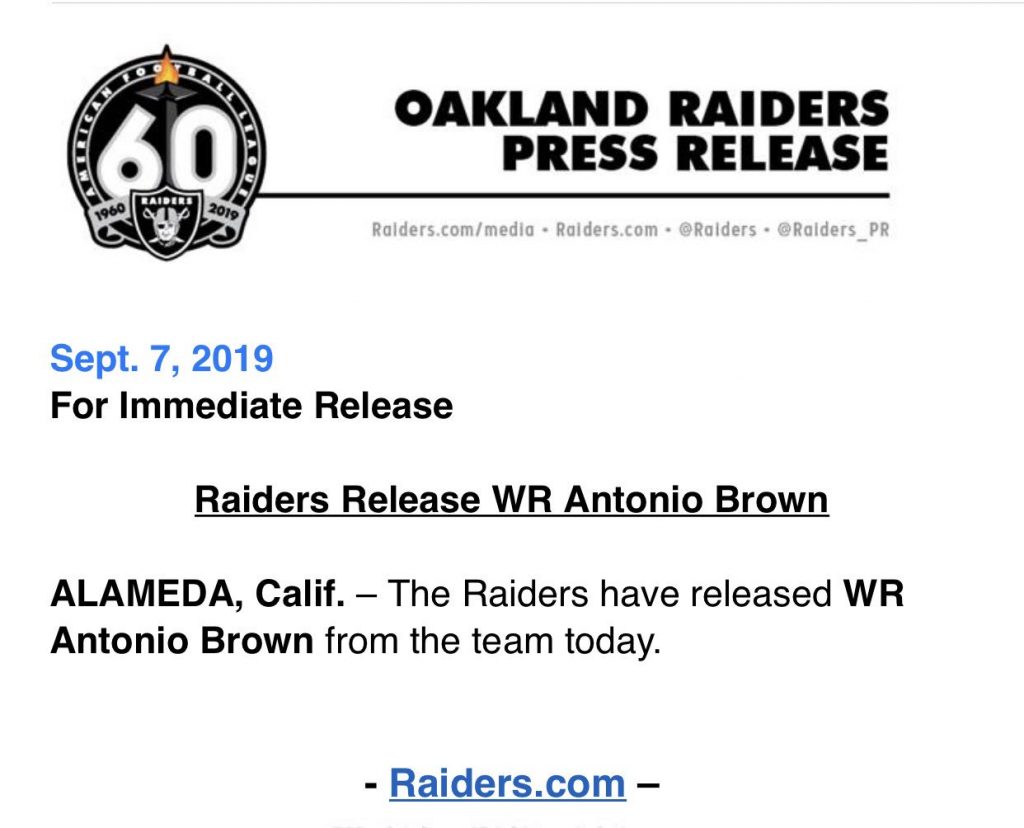 On Saturday September 7 at 1:58 p.m., the Super Bowl champs, the New England Patriots agreed to terms with Antonio Brown for a estimated $15 million contract as first reported by NFL Analyst Adam Schefter for ESPN.

Antonio Brown has agreed to terms with the Patriots, per Drew Rosenhaus.