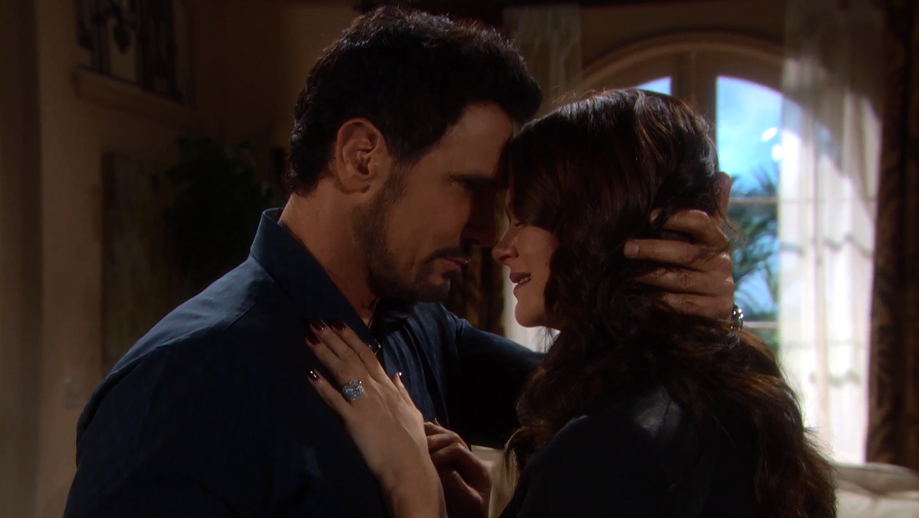 HOLLYWOOD—We know that things would get ugly between Katie and Bill Spencer on “The Bold and the Beautiful” in the midst of his cheating scandal. Yes, this is a tale we’ve discussed before, but this time around the stakes are much higher as its apparent, Katie forgiving Bill and Brooke for their dalliance may not actually happen.

Bill, concerned about Katie’s behavior is keeping their son, Will, shielded from her. I must admit that Bill has a valid point, between her drinking and mental state she may not be the best person to be around their son to ensure his wellbeing. However, that is not welcoming news to Liam who is not happy with his father lately, nor his brother Wyatt, who has become Bill’s YES man if you ask me.

Whatever Bill says, Wyatt goes along with it. I mean seriously, do you think it’s a good idea to send your sons on a trip to Monte Carlo with the woman who both of them are fighting over? Not smart Bill, not smart at all, especially when Liam has thrown out all of those morals about respecting his brother’s marriage. Look who he has a role model: Bill, who just cheated on his wife with his wife’s sister AGAIN! Of course if there is one person who happens to be in Katie’s corner its Brooke, I mean after the crap that she pulled, she’d have to be a champion to her sister in hopes of resurrecting their sisterhood.

So when Brooke heard about Bill’s latest stunt, she was completely behind her sister to have custody of her son, but Katie seemed slightly stunned by Brooke’s reaction. Brooke went to bat for her sister and rightfully she should have which left Bill a bit unnerved by the matter to say the least.

Bill has always been a stubborn fellow and whatever Bill Spencer wants he tends to get, but everyone has a day of reckoning Bill, and yours could be coming so be careful. There is nothing worse than a woman scorned, and Katie has already dealt with betrayal once, so she might figuratively and literally snap. Bill is still holding onto hope that he and Brooke will secretly reunite, but besides Katie, Bill, you have a new threat to worry about: Ridge!

Oh, yes, Ridge saw the sparks igniting between Thomas and Caroline and decided to cut things off with his wife because let’s face it people: the writings were all over the wall. Thomas and Caroline belong together, just as Brooke and Ridge do. So with Ridge single, it looks like Brooke might sink her claws into her former hubby, but I wonder if Ridge will turn to Katie instead of Brooke in his time of need. It will indeed be interesting to see how things fall into play.

Damn, when will Quinn Fuller learn enough is enough! After nearly getting busted by sneaking into Forrester Creations last week, she’s plotting to travel to Monte Carlo to meet Eric in secret. Quinn, your son, Liam and Steffy are also in Monte Carlo, and Steffy is no dummy.

She already knows her grandfather has a new lady in his life, and if she discovers it’s Quinn, trust me she will be livid, so much to the point that she might indeed pull the plug on her marriage to Wyatt and reunite with Liam. As much as this woman loves her son, she always finds a way to sabotage his relationships without even trying people. So it looks like Bill’s little plan, might blow up in his face in a big way: the woman he loves will leave him hanging yet again, and shall I dare say, Liam might hook-up with Katie. Now that would be a storyline worth watching people!