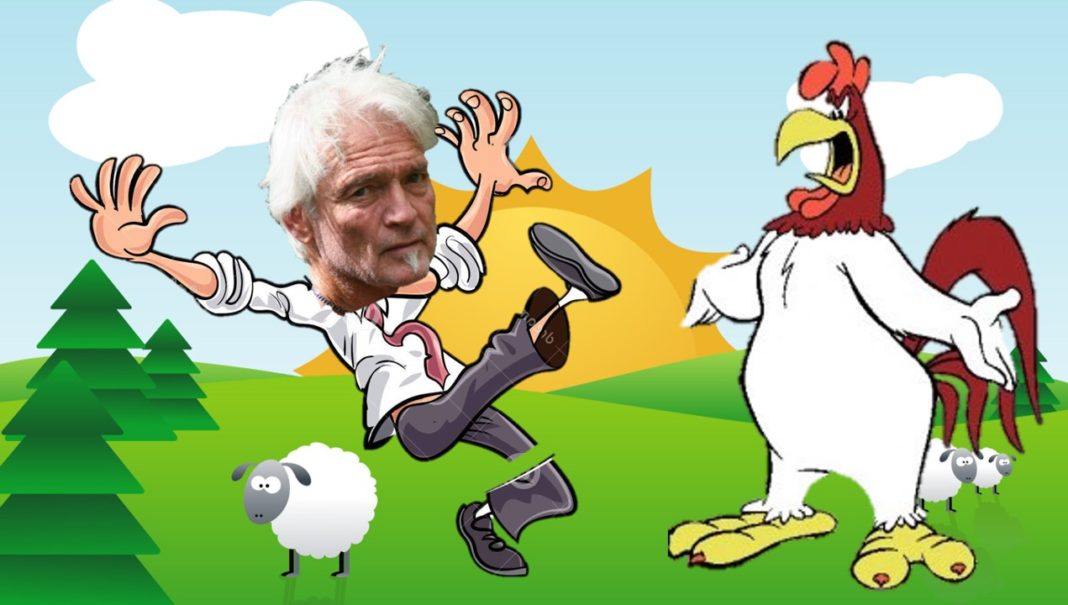 HELLO AMERICA!—My friend actor-writer, Chris Robinson called this week to inform me that he had just returned home to his ranch in Arizona from the hospital. It seems that he was attacked by a rooster which turned out being a complete battle of survival. The more he attempted to fight back, the more determined the attacking rooster became, refusing to give up the battle.  When Chris was able for a quick minute to escape, he tripped and fell on a rock, nearly breaking his ankle and disabling him to a point, it was necessary to be taken to the hospital. While being patched up, he noticed a sensation of terrible pain in his back area which he was informed by his doctor he was experiencing the first sign of SHINGLES!

Hearing this, he yelled, “OH, NO! It’s that Michael St. John’s fault, he came to visit me at my ranch a few years ago and he’s responsible!” This, of course, prompted a laugh from the doctor and nurse who quickly noted to my brother from another mother that I had nothing to do with his current situation. Further, 1 out of 3 people in America experience shingles, based on the fact, of having had chicken pocks as a child. The administered “shot” given at that time locked in a bacterium which would unexpectedly cause the shingles experience at any time during years to come. However, for the most people, the discomfort usually last only a month or so.

I didn’t want to inform my buddy that the “after effect” of ITCHING lasts longer; for me, it has been two years.  However, I didn’t want to hear him yelling at me, something he enjoys totally but noted in a forced soothing, very calming voice, “You’ll be just fine, Chris. Before you know it, the discomfort will only be a memory.”

As always, I am terribly impressed with “Olympics” Time, and so far, the winter contests are just as thrilling as ever. When watching these beautifully trained young people who are in total control of their thinking and body as well wearing a wreath of determination, hopefully, to give them the magic-force in reaching their gold is quite overwhelming, indeed.

For example, California’s Jamie Anderson has won the Olympic Gold in Women’s Snowboard Slopestyle in the crash addled contest. She, on her first run, landed a pair of 540s and a 720 to earn 83 points that lasted the contest and won gold. Another American to watch is Kelly Clark who is a fantastic athlete and no doubt will walk away with high honors as well.

Even though it’s only a few days in the Olympics, the athletes involved are very inspiring and will easily affect the thinking and drive as well as a supreme example for all young people who have dreams of serious accomplishments. This does not simply apply to sports but in every phase of life; if you have a serious desire in achieving something, go for it but preparing in every possible way is also paramount in reaching for the gold.