UNITED STATES—On Thursday, June 27, the United States Supreme Court made the decision not to include the question of citizenship on the 2020 U.S. Census as requested by the United States Department of Commerce. 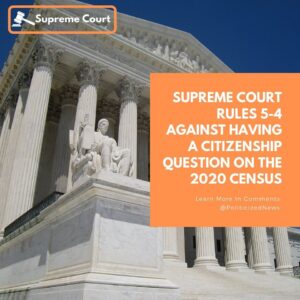 The Supreme Court ruled 5-4 against having a citizenship question on the 2020 Census.

This decision was made in the interest of time and President Trump’s administration previously noted that all paperwork must be finalized by Sunday, June 30, 2019.

To finalize the documentation, the question would have to be left off of 2020 U.S. Census.

President Trump came back with a rebuttal requesting a delay, no matter the length of time, for a more informative, decisive decision to be made.

The Damage Report’s, John Iadara noted the decision by Supreme Court Justice John Roberts indicating the court could not ignore the disconnect between the decision made and the explanation given stating the question of citizenship would not be added back to the U.S. 2020 Census, “for now.”

The U.S. Constitution and the 14th Amendment requires a census to be completed every 10 years.

This would not be the first time a question regarding citizenship was on the U.S. Census. The Citizenship Clause is a matter that has been contested before the Civil War.

Governor And Lawmakers Agree To Reopen Schools In March